You are at:Home»Refugees»Human rights falls off political priorities list 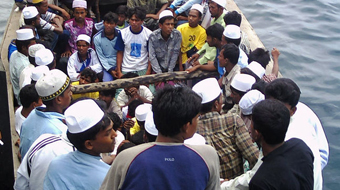 For all the talk by independents and Greens about the opportunity for a kinder and more considered political discourse to emerge from this inconclusive federal election, there is so far little to show for it in the area of human rights. Yes Aboriginal Australians will be formally recognised in the Constitution, but that other group of disadvantaged people in our community, asylum seekers, are unlikely to be accorded any greater respect by the Gillard Government. And the possibility of improved human rights protections for other groups of vulnerable Australians is still a long way off.

That asylum seekers face a continued bleak future under the Gillard Government’s regime of compulsory detention and politically-motivated forced returns to the ‘badlands’ of Afghanistan and Sri Lanka does not reflect well on the independents and Greens sense of priorities.

Rob Oakeshott, Tony Windsor and Andrew Willkie all believe that asylum seekers should be treated with greater compassion and that government should not pander to xenophobia and fear in the way in which it tackles the tiny numbers of those who arrive on our shores in leaky boats. The Greens have long held to a position on the issue which flatly opposes the Labor/Liberal hardline approach to asylum seekers and the misplaced attention on people smugglers.

In short, this 17-day post-election hiatus of meetings, demands, briefing papers and conversation presented an ideal opportunity for this group of independents and the Greens to force both Ms Gillard and Mr Abbott to change course on asylum seeker policy. To, for example, lift the cruel freeze on processing of claims of Afghan and Sri Lankan asylum seekers. To agree to reduce the time in which people are detained and left in hellish conditions to suffer physical and mental anguish. And to work as a Parliament on leading the Australian community into a better space when it came to accepting that we have a responsibility as a wealthy nation to open our collective arms to those who seek a better life.

But nothing seems to have changed at all. Mr Oakeshott’s rambling and disjointed remarks yesterday gave no hint that asylum seekers figured in his calculations over the past 17 days. Ditto Mr Windsor. Mr Willkie has said he got nowhere with Ms Gillard on the issue and The Greens have put the human rights of asylum seekers behind their demands for climate change policy.

But the relegation of the rights of asylum seekers to the bottom of the pile by those who were in a position to deliver government to either of the major parties in the past weeks is a sad illustration of a broader point – that Ms Gillard and Mr Abbott have not been put under any pressure to improve human rights protections.

Before the federal election the Rudd government, under pressure from church leaders like Sydney’s Catholic Bishop George Pell, shelved the proposal for a modest human rights act. In doing so it ensured Australians continue to be treated as second class citizens when compared with their counterparts in the UK, New Zealand and Canada to name but three of the many hundreds of countries which have human rights laws on their statute books.

Why was an opportunity not taken at least by The Greens, to push Ms Gillard into revisiting that previous decision and putting a Human Rights Act before the Parliament? The Greens five-page agreement with Prime Minister Gillard makes no mention of asylum seekers or human rights protections. This seems extraordinary given the party’s branding of itself as more compassionate than either the ALP and the Coalition. And nor has Mr Willkie addressed the issue, instead focusing on more narrow whistleblower’s protection laws.

The past three weeks represented a golden opportunity lost by politicians holding trump cards to deal a better hand for human rights in Australia.

Greg Barns is a barrister and director of the Australian Lawyers Alliance.