You are at:Home»Refugees»Pakistan and the rest of Asia Pacific»Quetta shuts down to mourn blast victims 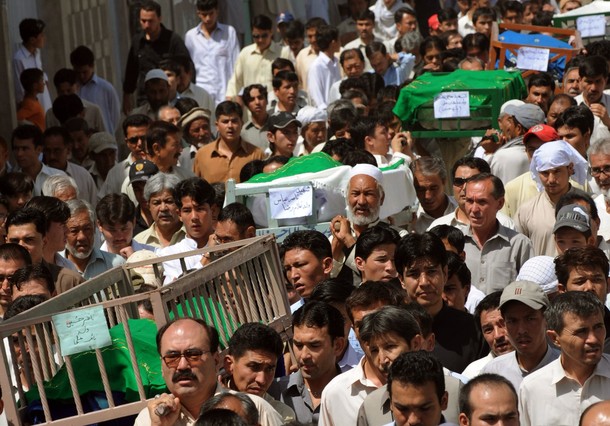 QUETTA: A complete shutter-down strike was observed in Quetta on Saturday to protest against the suicide bombing on the Al-Quds Day procession on Friday, which killed around 60 people and injured 185.

All the commercial districts of the provincial capital bore a deserted look, as most of the shops, business and shopping centres and educational institutions of the city remained closed due to a general strike call. Shops and vegetable markets located at Liaqat Bazaar, Meezan Chowk, McChangay Road, Alamdar Road, Abdul Sattar Road, Hazara Town and other areas remained closed. No business activity had been recorded during the day but shopkeepers opened their shops one hour before Iftar and started their usual business.

The funeral prayers of 29 people killed in the suicide bombing were held at the Hazara graveyard where they were buried afterwards. Different Shia organisations had arranged walkthrough gates and metal detectors at the two entry gates of the Hazara graveyard for security purposes.

According to the Balochistan Shia Conference, 57 people were buried in the Hazara graveyard, six bodies had been sent to Dera Allah Yar, four bodies to Afghanistan and two bodies to Chalgari.

A case had been registered in the city police station on Saturday under the anti-terrorism act against the suicide bomber. Police had arrested 12 suspects from different parts of Quetta to interrogate them for their alleged involvement in the attacks. Balochistan Chief Minister Nawab Aslam Raisani had ordered a judicial inquiry into the incident and had constituted a ministerial committee headed by Balochistan Home Minister Mir Zafarullah Zehri to probe into the matter. The Shia community urged Chief Justice of Pakistan (CJP) Iftikhar Muhammad Chaudhry to take suo motu notice of the bombing. The Balochistan government had also imposed a ban on organising rallies and religious processions following the deadly attack.

Separately, the death toll of the suicide bombing rose to 68 on Saturday, as more injured of the attack succumbed to their injuries. Addressing a news conference, representative of Balochistan’s Shia community, Haji Abdul Qayyum Changhazi said that 60 people had been killed in the firing, which took place after the suicide bombing. “The FC personnel and other armed men opened indiscriminate fire on the procession and the firing continued for one and a half hour. Police was also involved in the firing,” he alleged adding that the Quetta CCPO, who had been made an OSD now, had granted the permission to held the demonstration at the Meezan Chowk.