You are at:Home»Refugees»Unrest in immigration jail 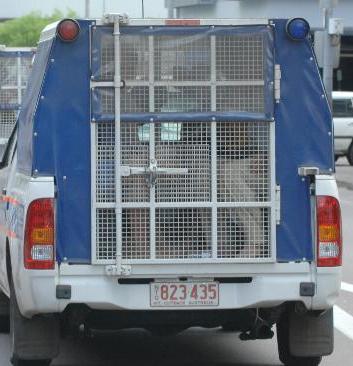 Prisoners detained without trial at the Northern Immigration Detention Centre in Darwin have staged dramatic protests. On August 29 and 30, about 120 Indonesian detainees, accused of (but not charged with) people smuggling, staged protests on the jail’s roof and set fire to garbage. On September 1, about 90 Afghan Hazara refugees broke out of the jail and held a peaceful protest on the Stuart Highway.

Greens senator Sarah Hanson-Young told AAP on August 30 she believed the Indonesians were poor fishermen who had been conned into making the journey.

She told the ABC on September 1 that Australia’s treatment of Indonesians accused of people smuggling was comparable to the US’ treatment of its prisoners at Guantanamo Bay.

“The idea that a country can simply hold somebody indefinitely in detention without charge for any length of time simply because they don’t want to bring forward those charges and they happen to be a foreign citizen, is not appropriate.

“Individuals who are facing criminal offences such as people smuggling need to know what charges are facing them and the process by which they will be dealt with by the legal system.”

Indonesia’s acting consul in Darwin, Bambang Daranindra, told ABC on August 31 that all the men had been detained without charge for up to nine months. He said many of them were poor, uneducated fishermen, tricked by the leaders of smuggling rings.

A spokesperson for the Department of Immigration and Citizenship justified their detention without charge, telling Green Left Weekly: “The AFP and Commonwealth Department of Public Prosecutions are responsible for investigations and prosecutions. Until such time as a decision is made whether to charge an irregular maritime arrival (IMA) with people smuggling offences, they are detained as unlawful non-citizens.”

Most of the Hazara refugees from Afghanistan, who staged the protest beside the Stuart Highway after breaking through a perimeter fence, have been in detention for more than nine months.

They did not attempt to escape but displayed banners — painted on bedsheets — which read: “Please help us”, “Show us mercy”, and “We are homeless, defenceless and we seek protection”.

After seven-and-a-half hours they surrendered to police.

One of the protesting refugees told the ABC on September 1: “Every week, every day, we’re going to die. Nine months we here … that’s why I want to go out to talk with you, all of the population of Australia. I need your help. My children aren’t safe in this place; we don’t know where is our family.”

Melbourne-based refugee advocate Pamela Curr was in Darwin on September 1 and witnessed the Hazara refugees’ protest. That morning she asked a senior officer to give the asylum seekers water as it was extremely hot, she told GLW. When she checked back in the early afternoon, they still had not been given water. Fifteen of the protesting refugees were hospitalised suffering from heat exhaustion and dehydration.

Curr said it was likely the denial of water was authorised by DIAC, citing spokesperson Sandi Logan’s comment to reporters that it was a “negotiating tactic”. Logan later retracted this comment, and police and DIAC both claimed that they had not denied food and water to the protesting refugees.

Curr was in Darwin to visit asylum seekers held at the Darwin Airport Lodge and the Asti Motel, designated by the government as “Alternative Places of Detention” for unaccompanied minors, teenagers and families with children. She told GLW that they were surrounded by high fences, and guards were everywhere. She said that many of them had arrived in April. The teenagers had been confined to the buildings since then, and none of the children had been to school.

On September 2, 82 Hazaras who were involved in the protest were transferred to the remote Curtin Immigraton Detention Centre in Western Australia.

The government claimed that this was not as punishment, but because of damage caused to the Hazaras’ accommodation by the Indonesian detainees. Curr told GLW this excuse “beggars belief … it’s an absolute lie. The fishermen were held in a separate area.”