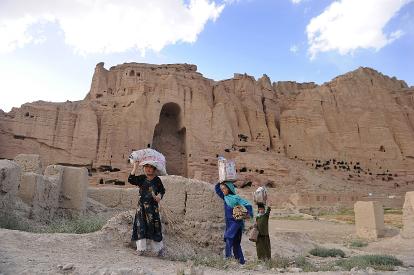 Afghanistan's northeastern jewel is the war-ravaged country's best hope for reviving a tourism industry that was a hippy trail fixture during the 1960s. AFP photo
News

By Admin on September 4, 2010 1 Comment
Afghanistan's northeastern jewel is the war-ravaged country's best hope for reviving a tourism industry that was a hippy trail fixture during the 1960s. AFP photo
Share this story Afghanistan's northeastern jewel is the war-ravaged country's best hope for reviving a tourism industry that was a hippy trail fixture during the 1960s. AFP photo

Two empty niches facing over a lush green valley towards the snow-capped Hindu Kush mountains stand in silent testimony to Bamiyan’s rich past – and its uncertain future.

Afghanistan’s northeastern jewel is the war-ravaged country’s best hope for reviving a tourism industry that was a hippy trail fixture during the 1960s, when Westerners came to hang out near the world’s tallest Buddha statues.

They became symbolic of mindless Taliban brutality when in 2001, months before their regime was overthrown, the Islamists dynamited the statues – which they branded idolatrous – that had stood sentinel for 1,500 years.

While the ethnic Hazara population – mostly consisting of Shia Muslims – have managed to ensure Bamiyan is the most peaceful part of the country, that reputation is being threatened by insurgent encroachment.

Two recent incidents have dented Bamiyan’s calm: the death of a soldier from New Zealand in a July Taliban attack, which runs the reconstruction effort, and an insurgent ambush that left six Afghan civilians dead.

Nevertheless, Bamiyan – marked by dramatic ochre cliffs towering over the ancient Silk Road that once linked Asian trade to the West – is starting to lure hardcore adventure tourists back to its World Heritage wonders.

“I can’t believe my eyes, they are so amazing,” Mohammad Hashim, from Kabul, said during a recent visit to the endless network of Buddhist caves dug into the sharp sandstone overhang.

“It’s a pity they’re no longer there,” he said, pointing to the massive niches carved into the rock that housed the two Buddha sculptures – one 53 meters tall, the other 35 meters.

The niches, which dominate Bamiyan city, the eponymous capital of the province, are being restored as a UN World Heritage site, and there is talk that Japanese funding could rebuild the sculptures, too.

Proposals by both local and foreign organizations to reconstruct the statues from the shattered remains are being discussed.

Bamiyan was once the centerpiece of Afghanistan’s tourism industry and even after three decades of invasion, civil war and insurgency has a friendly, peaceful charm that seems incongruous in the otherwise volatile country.

But the violence which began with the Soviet invasion in 1978 wiped out tourism.

Officials are well aware of the area’s potential, however, and are determined to showcase Bamiyan’s beauty and put it back on the international travel map.

A series of festivals has given visitors a taste of the local sporting and music scene, and there is talk of a ski resort being developed to energize the economy in one of the poorest regions in one of the most impoverished countries in the world.

The number of people visiting Bamiyan appears to have stayed static in recent years and they are mostly Western aid workers based in Afghanistan, said Amir Foladi, head of the Bamiyan Ecotourism Program.

The renewed presence of the Taliban, and the negative publicity generated by a war that is dragging towards its 10th year with the presence of almost 150,000 U.S.-led troops, is threatening the revival.

But tourism officials say recent incidents are an aberration and insist the risks are low.

“What we don’t have are tourists.”

The Bamiyan Ecotourism Program was launched last year and is hosting a spring and summer festival that showcases the province’s natural riches and is held on the banks of Band-e-Amir River, 80 kilometers outside the city.

The area was heavily mined by militias and Taliban alike, and a lack of ecological protection has seen some damage caused by animal grazing, which has led to topsoil erosion and landslides, and fishing with dynamite.

In 2004 the area was submitted for recognition as a UNESCO World Heritage site and in 2008 it became Afghanistan’s first national park.

Foladi said that since the fall of the Taliban, up to 80,000 tourists have visited the lakes, despite a lack of facilities.

Insecurity keeps the dream at bay

The Afghan government’s awareness that tourism brings in much-needed cash, along with support from aid organizations such as the Agha Khan Development Network, or AKDN, means the environment is being protected and local traditions nurtured.

“Running these festivals has two main purposes,” said Robert Thelen, who heads the Bamiyan program for the AKDN, run by the Agha Khan, the billionaire leader of the Shia Ismaili sect, to which many Hazara belong.

“Firstly to bring an economic benefit to the communities. The second purpose is to help encourage local traditions as tourist attractions,” Thelen said.

Business is at least improving for those catering to the latest batch of tourists.

“I’m very happy, business was very good today,” said Sayed Hussein, owner of a restaurant on the shores of azure lakes, where thousands of people gathered in July for the second Bamiyan Silk Road Festival.

“This is definitely a good sign for the local economy,” he said.

But, he conceded, rebuilding Bamiyan’s tourism industry to the heights it enjoyed 40 years ago, is still a distant dream.