You are at:Home»Human Rights»DEATH TOLL REACHED 73, OVER 200 INJURED IN QUETTA BOMB BLAST 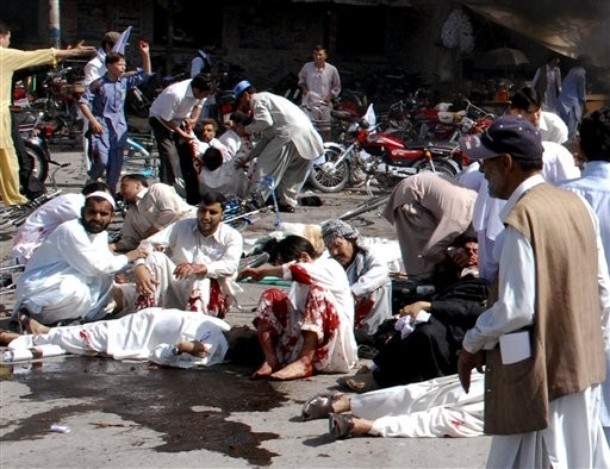 According to our sources in Quetta, the death toll has reached 73 with over 200 injured due to bomb blast(s) occurring at the heart of the rally today. The peaceful rally is being observed by Imamia Students Organization (ISO) every year on the last Friday of the Holy Month of Ramadan to proclaim international solidarity of Muslims in support of the legitimate rights of the Muslims of Palestine.

In Quetta, people, belonging to all faiths and schools of thought, participate in the rally to show their unity and unconditional support to the people of Palestine. The rally is led to the heart of the city, known as Mizan Chowk where Ulemas and religious scholars throw light over the importance of Baith-ul-Muqaddas or Al-Quds and express their unprecedented commitment and support to the Palestinians.

Due to recent surge in wave of suicide bombings and well-organized attacks on processions, rallies, gatherings and prayer congregations of Shi’ite sect of Islam in Pakistan, “The law enforcement agencies had credible evidence that the terrorists have plans to attack the rally in Quetta”, said Inspector General, Balochistan Police, while talking to a TV Channel. The IG, Balochistan Police failed to executive a master plan to cordon off the area for complete check up before the rally was taken out and merely claiming to have reliable evident of suicide bombing insinuates law enforcement agencies’ involvement into such executions. There is unconfirmed report as to how the blast happened as some eye witnesses believe that the bomb may have been planted into a motorbike and blew with a remote control while some sources term it as suicide bombing. So far, 73 deaths have been confirmed and over 200 injured who are mainly of ethnic Hazara, predominantly belonging to Shi’ite sect of Islam. There were no doctors available on duty when the injured were rushed to hospitals for emergency treatment which had left many expire due to apathy of the Health Authorities. Reportedly, many casualties happened due to shootings of Frontier Corps – a paramilitary force – being controlled by the Federal Government and called upon at the request of the Provincial Government to assist in maintaining law and order situation in the city. Their negligence of the professional duties and firing at innocent people requires immediate judicial inquiry into matter in order to ascertain the ground realities and penalize those held responsible for ordering and opening fire at innocent citizens.

Needless to say that this is not first time when law enforcement agencies have opened fire at innocent ethnic Hazaras as the troopers deployed at the sites of processions and rallies belong to Sunni faction of Islam, mostly belonging to Wahabi orthodox faction, responsible mainly for spreading terrorism and fanning extremism in entire Pakistan. In an stance, on 2nd March, 2004, the religious fanatics linked to Al-Qaeda and the Taliban attacked the peaceful mourners in Liaquat Bazaar, Quetta with grenades and automatic assault rifles killing 65 people and injuring over 250 innocent Hazaras. The incident happened on the 10th of Muharram when the Shi’ites all over the world take out processions to commemorate the Martyrdom of the grandson of Prophet Mohammad (Peace be upon him and his progeny), Hazrat Imam Hussain (A.S) and his 72 companions. On 02-03-2004, the Anti Terrorist Force – a special group of police recruits – formed to combat terrorist but they opened fire on innocent Shi’ite Hazaras which killed and injured over 300, creating a chaotic situation in the city which remained, alarmingly, tense for years to come.

The Hazaras have been living in Quetta, Pakistan even before the birth of the country whose inclusion and services into the then British Army were known as Hazara Pioneer. Under the banner of Hazara Pioneer, the Hazaras would serve the army in all disciplines including sports. They are now facing a threatening situation by the Taliban cum Al-Qaeda networks who have active support of on-service high ranked government bureaucrats and politicians. Evidently, many of these terrorists were apprehended by the law enforcement agencies who were either released by the courts of law due to insufficient documentary proofs or their escape from prisons were facilitated by the local police but no one has been held responsible for these maladministration nor any satisfactory enquiry has been conducted to nap the police officers and bring them to justice.