You are at:Home»Refugees»Australia»Mass breakout of detainees at Darwin immigration detention centre 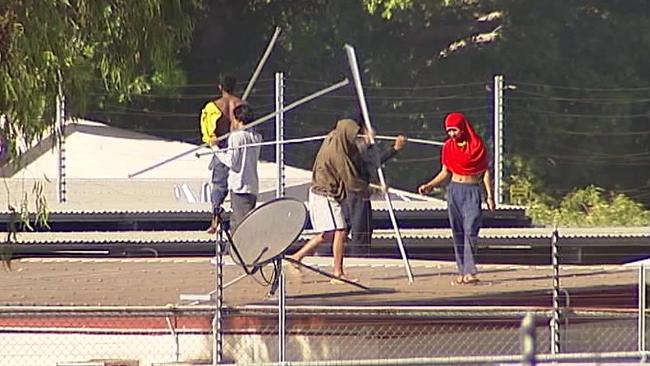 By Admin on September 1, 2010 0 Comments
A riot by detainees at Darwin's immigration detention centre yesterday. Source: Supplied
Share this story The large group sat in 30-degree temperatures on the side of the Stuart Highway, pleading for authorities to re-examine their failed bids for refugee status.

Police circled in on the group around 2pm today, ending the stand-off.

Assistant Police Commissioner Rob Kendrick said he was pleased with the way the incident had been resolved.

“They peacefully came into our custody,” Mr Kendrick told reporters in Darwin.

Seventy-six asylum seekers were taken into police custody and are being held at the Darwin watchhouse as unlawful non-citizens.

A further five protesters, two of whom were suffering from heat exhaustion, were in the custody of immigration officials at Royal Darwin Hospital.
Meanwhile, the immigration department says an investigation is under way into how so many detainees managed to breach security measures, including two electric fences.

It’s not yet clear whether police will press charges.

Earlier the Afghan asylum-seekers, who pushed down two sections of electrified fence and broke out of Darwin’s main Immigration detention centre, said they were prepared to go on hunger strike in order to remain in Australia.

The men said Immigration told them they had failed in their refugee applications and could go back to Afghanistan or neighbouring Pakistan because the situation in those countries was now safe.

The 92 men broke out of the detention centre, within the Berrimah defence facility on Darwin’s outskirts at 6.30am, apparently walking past their private contractor-security guards and using their numbers to push down to sections of fence.

Watch a video of the breakout

The men held up banners fashioned out of bed sheets saying, “Please help us, show mercy to us”, “Please don’t play with out lives”, and “We need protection not detention”.

The men stood peacefully in a large group on the side of the busy Stuart Highway as motorists passed on their way to work.

The breakout came after two days of unrest inside the facility in which Indonesian sailors burned mattresses in protest at being held for months without being charged.

Another spokesman for the men, Hussein Ali, said immigration officials had told them that Afghanistan was safe for them to return to.

The men said they would be killed if they went sent home. The men said that people who had been sent home from Nauru under John Howard’s Pacific Solution had been “slaughtered” and the same would happen to them.

By 8am the group was seated and in discussions with immigration officials and Northern Territory Police who had turned out in large numbers to contain the situation.

By mid-morning, a Northern Territory police negotiator told the men they needed to be individually searched for weapons if discussions were to continue. The men complied and submitted to body frisking.

Hussein Ali said some of the men had been at Christmas Island and the Darwin facility for nine months and were now being told they were to be sent home.

The men are ethnic Hazara, who have been targeted by the Taliban and who have traditionally been overwhelmingly successful in their applications for refugee status in Australia.

Mr Ali said some men had not lived in Afghanistan for some years but had fled Pakistan, where he said the Taliban was equally active.

Asked how the group had escaped, he said: “We broke the fence and we came out. I need you help. I come for protection here.”

Immigration spokesman Sandi Logan said most of the men had not exhausted their avenues of appeal.

“Some may have already been told in their process they have not got protection,” said Mr Logan, but could still apply for an Independent Merits Review.

“None of these yet have gone through the entire process.”

Mr Ali was under the impression he and the others were out of chances.

“We are not here for fighting, we came here for protection,” he said. “We did nothing wrong. We just want to say something to Australian people. If we are sent back home we will be killed by the Taliban. We are surrounded by the Taliban. They are Sunni Muslims, we are Shia Muslim.”

He said there were some 250 Afghans inside the facility, along with about 190 Indonesians who are being held for people-trafficking.
Source