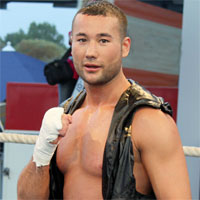 Unbeaten middleweight Hamid Rahimi (16-0, 6 KOs) scored a fourth round TKO over Armen Azizian (9-11, 1 KO) to claim the vacant WBA PABA title on Thursday night on a private boxing show in Rostock, Germany. Rahimi took over the fight in the second round and floored Azizian in round four with body shots. The bout was waved off during Rahimi’s follow up barrage. Time was 1:33.
Post Views: 626
Share. Twitter Facebook Google+ Pinterest LinkedIn Tumblr Email