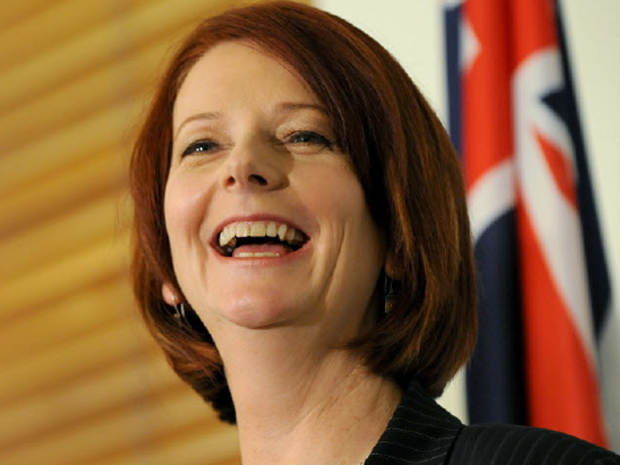 By Admin on August 23, 2010 0 Comments
Australia appointed its first woman prime minister, Julia Gillard, who vowed on Thursday to end division over a controversial mining tax, resurrect a carbon trade scheme and call elections within months.
Share this story

A few days after grabbing possession of the Australian prime minister’s office and promptly finessing a solution to the mining tax issue that gave her predecessor Kevin Rudd the bum’s rush, Julia Gillard has poked a stick into the hornets’ nest of one of the country’s most contentious issues.

In her first policy speech as prime minister last week, Gillard proposed that Australia tackle the surge of “boat people” asylum seekers arriving primarily from Sri Lanka and Afghanistan by setting up a processing centre in the impoverished neighbouring state of East Timor.

Her proposal has raised a chorus of criticism at home and abroad while pundits try to figure out whether Gillard has enhanced or blown her chances of winning a general election due in a few months.

The backlash has prompted Gillard to retreat from her attempt to designate East Timor as Australia’s refugee detention centre and her Labour party to mount a damage control campaign.

Australia is holding over 4,000 would-be refugees at detention camps on Christmas Island in the Indian Ocean northwest of the mainland.

Although an Australian territory, the island has been made legally exempt from the rights and privileges that would be afforded refugees on the mainland.

This has caused a good deal of angst among some Australians, who find it hard to reconcile the denial of rights to people seeking the protection of Australian law. Meanwhile, many people get equally exercised that successive governments have been reluctant to deport people whose applications for refugee status have been denied.

There is, for example, a 60-per-cent refusal rate against Afghan would-be asylum seekers, most of whom are from the minority Hazara ethnic group. However, only two people have been returned to Afghanistan, both voluntarily.

But Gillard’s suggestion of trying to cool off the refugee issue and put out of business the human traffickers who are profiting mightily by shipping people on often unseaworthy boats from Indonesia has raised widespread opposition.

The idea has found little support in East Timor, whose sparse infrastructure was largely destroyed by occupying Indonesian forces after the country achieved United Nations-mandated independence in 2002 and which remains almost totally dependent on foreign aid.

Gillard apparently floated the idea by East Timor’s president, Jose Ramos Horta, in a phone call last Monday night before making her policy speech, and got his qualified backing.

But Horta fills a largely ceremonial role and she did not approach her East Timorese counterpart, Prime Minister Xanana Gusmao, the true leader of the administration.

Gusmao, his supporters and several opposition party members have all rejected the idea for both legal and practical reasons, as well as objecting to setting up shop as a detention camp to alleviate Australia’s problems with refugees.

At the same time, East Timor, which was illegally occupied by Indonesia after Portuguese colonial rule came to a sudden end in 1975, is very sensitive to human rights issues, particularly those involving displaced people.

And Gusmao is not well-disposed towards the Canberra government anyway. East Timor is in a long-running dispute with Australia over ownership of and the economic benefits from oil and natural gas deposits under the Timor Sea dividing the island from Australia’s northwest coast.

The East Timorese prime minister is reported to be in high dudgeon because of the decision by the company Woodside Petroleum not to build a processing plant — with all the jobs, skills and value-added benefits that would entail — on the island.

At home Gillard has been accused of pandering to the protectionist instincts of Australian voters on immigration issues in the run-up to a likely election call.

Critics have claimed her East Timor processing center solution is similar to that of the former conservative Liberal party-led coalition of prime minister John Howard, which Gillard criticized loudly when she was in opposition.

Howard pursued what was known as the “Pacific Solution.” This involved using Christmas Island and contracts with the governments of Nauru and Papua New Guinea for the use of their land for camps to process asylum seekers away from the requirements of Australian law.

When Rudd took office at the head of the Labour party government in 2007, he shelved the “Pacific Solution” policy and pledged instead to “turn back the boats” carrying asylum seekers by deploying more coastal patrol craft.

This approach had little success and faced with a surge in the number of boat people arriving and being detained on Christmas Island, Rudd decided to halt for three months consideration of asylum requests from Sri Lankans.

That deadline was due to run out last Thursday, and Gillard’s announcement on Tuesday was intended to pre-empty the vacuum.