You are at:Home»Refugees»Call to close detention centre 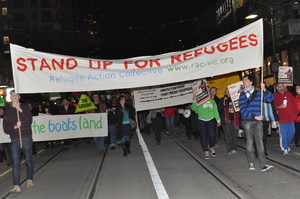 By Sue Bolton
Most Melbourne people wouldn’t know that there is a refugee detention centre, called the Melbourne Immigration Transit Accommodation, in Broadmeadows. It is hidden away behind the Maygar army barracks on Camp Road with no sign to indicate it is there.

The Socialist Alliance organised a protest outside the centre on August 11 to publicise its existence. When the local media was notified about the protest, none of the journalists approached had heard of it.

The detention centre holds an estimated 42 unaccompanied Afghan teenagers. They are all from the Hazara ethnic minority, which is persecuted by the Taliban.

Protesters brought along a boat with “Not another Tampa election” written on it.

Socialist Alliance Senate candidate and local resident Sharon Firebrace told the protesters: “It is shameful that our government is locking up children and unaccompanied teenagers in refugee detention centres.”