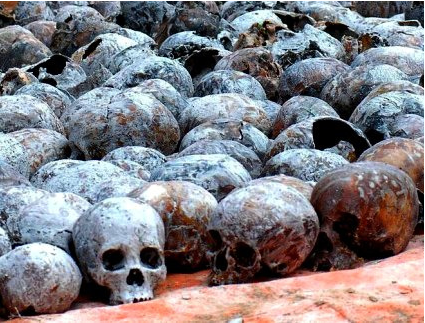 Hazaras in Afghanistan. A Quiet Genocide Last summer, I had the good fortune to work with a young Afghan law student, Farshad*. He was my research assistant in a study I worked on to do with the legal rights of a minority in Afghanistan.

Farshad was perhaps ill-suited to research. He wanted action; he wanted to change his country and he was possessed with a very real sense of urgency when it came to the future of democracy in Afghanistan.

He barely had the patience to sit through interview after interview, many of them with conservative-minded mullahs whose views on women’s legal rights were hardly enlightened. He was forceful and passionate, and had robust ideas about transitional justice and legal reform. He wanted some justice for Afghan victims of human rights abuses, and particularly, for those of his own persecuted ethnic group, the Hazaras.

And he had his own story to tell, that illuminates much about the pain of persecution and war but also exemplifies the defiance so many Afghans embodied during the repression of the Taliban years, as the rest of the world turned its head the other way.

Farshad is Hazara. If you’ve seen or read “The Kiterunner”, you know the story- the persecuted ethnic group of Afghanistan, descended from the Mongols who invaded Afghanistan, under Genghis Khan, raping and pillaging, and leaving a people who, 800 years later, are still despised. But the world outside has never known- or acknowledged- just how much. Genocide has occurred in Afghanistan, and its ugliness echoes that of its contemporaries- Bosnia or Sudan for instance.

Half of the Hazaras were wiped out under the Afghan king Rahman. Their neighbourhood in Kabul was obliterated during the civil war and still shows the most damage and least reconstruction to this day. But the Taliban topped everyone else in their zealous racism towards Hazaras, manifested in several massacres, still inadequately documented today. In 2008, I had met a man who was in Bamiyan, part of the Hazara homeland, in the late 1990s and witnessed a massacre by the Taliban. He told me they were mostly women and children, grabbed from their homes and murdered outside, during the winter.

The snow ran red with blood, and the bodies were left for days. The only ones who survived were those whose hiding places were not discovered, or men who managed to overcome their killers. Farshad told me that when Hazaras came across sites where Taliban bodies were left, they found keys in their pockets. He said it is because they believe they will go to heaven for having murdered people who look different from them, and they should have keys with them to enter the gates of heaven. “What kind of belief system is that?” my friend had asked.

In one of our interviews for the study, a respondent, a Pashtun mullah, would not shake Farshad’s hand. He said it happens often enough.

In Iran, the Hazaras were worse off than the already destitute, disenfranchised, persecuted Afghan refugee population in Iran, because they look different and were more easily distinguished from Afghans of Persian ancestry. But Farshad dismisses those years. He is just happy to be alive.

When the Taliban were in power, they were particularly brutal in Herat, in western Afghanistan, and in the Hazarajat, which encompasses Bamiyan, home of the once revered giant Buddhas, destroyed in 2001 by the Taliban, who blew up these ancient monuments that symbolized a once tolerant, multi-religious past in Central Asia. In these regions, people are Muslims of the Shia sect, unlike the Taliban’s Sunni sect. It was here that the Taliban, in a rage directed at the Shia minority, mercilessly tortured, massacred and otherwise disappeared men, women and children.

Farshad and his uncle, plus two friends, made a perhaps misjudged decision to visit some family inside Taliban Afghanistan, while they were refugees in Iran. They drove to the border and then entered Herat, having paid an exorbitant amount to a driver to take them. The driver explained, “if I go the usual way, we will pass through three checkpoints. For double the money, I can take you a different way and we’ll avoid the checkpoints”. Farshad and his uncle had little money. They opted for the usual way.

When they reached the first checkpoint, the Taliban police stopped them. Across the road was a group of about 60 Hazara men. Their heads had been shaved and they were being beaten with plastic shards by Talibs. There was a container nearby, used to imprison and transport men to different provinces, when the local prisons filled up. But the containers often succeeded in killing the men by the time the doors were reopened hours later, when the heat and lack of oxygen led to suffocation or heat stroke. The sight of the containers was an ominous sign.

The police looked inside the car at Farshad’s two friends and asked them, “are you Hazara?” They nodded yes. They were pulled out of the car. The Talib thug then turned to Farshad’s uncle. “I am Uzbek” he lied.

The Taliban paused, then looked at Farshad and said, “Yes, you look Uzbek. But him, he is Hazara. Come here”.

Farshad’s uncle said, “He is my nephew. If I am Uzbek, how is it that I have a Hazara nephew!”

I imagined the air in the car, heavy and dusty, their hearts thudding, waiting for the Talib’s reaction. They could probably hear the cries of the other men outside. The Talib let them pass. Farshad never saw his two friends again.

To keep to their story, they had to pay the driver three times the agreed-upon amount, or he threatened to tell the police at each of the next checkpoints that they were really Hazaras.

When they left Afghanistan, they took the long way around through Pakistan, rather than drive through Herat again. Their ethnicity was far too great of a liability. Farshad told me he had many such experiences, and he had lost many friends.

We talked about why there is no official acknowledgement in Afghanistan or beyond of these crimes against humanity, of the occurrence of genocide against Hazaras, or I thought to myself, of the gender-cide and institutionalized misogyny perpetrated by the Taliban against half the population- women.

On the same day that Farshad had made my hair stand up with the story of his escape from Herat, I read an article in The New Yorker by Jon Lee Anderson called “Lorca’s Bones” that described how Spain is not yet ready to confront the terror it lived through under Franco- 35 years after his death, and 80 years after the Spanish Civil War. Spain’s most revered literary figure, Federico Garcia Lorca, murdered by Franco’s thugs, still lies in an unmarked grave, his bones in a heap alongside the bodies of two bullfighters and a schoolteacher. The bullet holes from executions still mark the wall that overlooks the mound. His relatives do not want his body exhumed.

Anderson recalls a verse from a 1918 poem of Lorca’s:

If death is death, what then of poets, and of sleeping things, if no one remembers them?

I don’t know when Afghans, en masse, will be ready to confront the past. If they are like Spain, rolling on from brutal dictatorship into a new regime without missing a beat, perhaps a very long time. But Farshad wants acknowledgement, and deserves (but does not expect) justice. He wants someone to call it like it is, even just to speak it aloud, to know that others also know it is real, even if they can never know the pain and loss he has felt.

*Farshad is a pseudonym. The name has been changed for the safety of this source.