You are at:Home»Refugees»Children caught in the crossfire 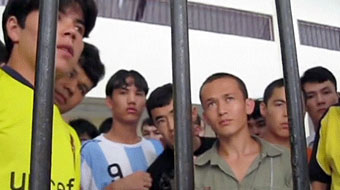 Children caught in the crossfire Asylum seekers continue to simmer as an election issue. Catherine Naylor tells the harrowing story of a child forced to seek safe shelter on his own.

Qadir Fedayee was a 14-year-old boy when he last walked from his home in northern Afghanistan, to attend the funeral of a friend. When he closed the door behind him and stepped onto the streets of Mazar-e-Sharif, he did so unaware that a few hours later the Taliban would take over his city, kill his father and force Fedayee – separated from his mother and siblings – into hiding.

He disguised himself in a burqa and fled Afghanistan a year later, one of thousands of children who cross that country’s borders each year without parents to protect them.

After months traversing countries and continents that he could not name or number, keeping hidden, staying quiet, and being handed from one smuggler to the next, Fedayee, at 16 years of age, found himself in a broken down boat, somewhere between Indonesia and Australia.

“The ocean was like mountains. It was metres higher than us. People began to pray, the prayers you say when you die.

“We had just finished when we spotted the [border patrol]plane. You can’t imagine how happy we were to see that.” He pauses for a moment. “When I remember this, I always start crying.”

Last year, more than 5900 unaccompanied Afghan children made the hazardous journey to Europe to seek asylum. In Australia, 387 children – from Afghanistan, Sri Lanka, Iraq, Iran and Somalia – are waiting for their claims to be processed, having made their way here on their own. That’s almost 100 in the past two months – the youngest is 13 years old.

As a Hazara and the son of a politician, Fedayee says he had no choice but to flee into Pakistan – he was a target for the Taliban. “I was very young, I was not capable of making decisions. I did not want to go.”

It was his uncle who drove him over the border, where he was handed to a smuggler.

“I was pretty scared. I was pretty young, to be honest. I didn’t even bother about [where I was going]. They told us ‘the place you are going will look after you. There will be no Taliban, you are going to be safe’.”

When they make it to Australia, unaccompanied children are put under the guardianship of the Minister for Immigration, Chris Evans, until they are granted a visa or removed from the country, a situation the Australian Human Rights Commission says is untenable.

“The minister cannot make the best interests of an unaccompanied child his primary concern when, at the same time, he or she is the detaining authority and the visa decision maker,” she says.

The commission recommended in 2004 that guardianship be removed from the minister and given to an independent body, such as state child protection authorities.

That recommendation has still not been adopted. Meanwhile, the number of unaccompanied children waiting for claims to be processed has doubled since 2001 to 387, representing almost 10 per cent of 4594 asylum seekers in Australia. David Manne, the executive director of the Refugee and Immigration Legal Centre in Melbourne, says the guardianship arrangements are abhorrent.

“There are processes in place in Australia for children to be appointed appropriate guardians when their parents are unable to care for them. It beggars belief that these processes are not applied to refugee children and that they are detained in remote locations.

“This is clearly contrary to the basic needs of these children, but it is also potentially very prejudicial to their rights and to their future to not have access to a guardian to look after their interests.”

Senator Evans is aware of the guardianship issue, his spokesman says, and has asked his department to provide him with options to consider.

Louise Newman, a child psychiatrist who works with asylum seekers, says in many ways the unaccompanied minors are like teenagers anywhere.

“They like to have fun, forget stuff, play sport, but there’s a maturity that comes with the burden they carry.

“They are far more adult because of the circumstances they find themselves in, but they are still emotionally ill-prepared for that. And they suffer huge grief, loss and anxiety about their future, as well as tremendous homesickness.”

About 60 teenagers are in group homes in Port Augusta and others are in facilities in Brisbane and Melbourne. Until July 8, when the department announced that 35 unaccompanied minors from the Christmas Island detention centre were to be moved to alternative accommodation in Darwin, the overwhelming majority had been held on the island, where access to support services and legal advice is limited.

Manne says Australia would further breach its obligations to act in a child’s best interests if unaccompanied children were sent to East Timor for processing.

The Department of Immigration says its primary concern in processing child protection claims is ensuring the needs and best interests of the children are met and that they receive assistance with their claims.

Each child is appointed an independent adviser who sits with them in interviews, but in her report into children who seek asylum alone, Mary Crock, a professor of law at the University of Sydney, found that many saw their adviser as another government official.

Fedayee, who was detained in Woomera, says he received no help from the government and was treated with hostility by the officer who handled his case.

“Whatever I said to my case officer, he said, ‘You are lying. You are not Hazara because your nose is too big. You are not Qadir. The story you are telling is bullshit’.

“I was looked after by my family friends in Afghanistan. I was handed to a people smuggler who looked after me. When I came to Australia, they took my childhood, put me in prison, played with my mind and demolished my life.”

To invoke Australia’s protection and be allowed to lodge a claim for asylum, unaccompanied children, like all asylum seekers, have to show they fear persecution for a reason set out in the Refugee Convention.

Thom says the system is too adult focused and excludes types of persecution unique to children – such as forced recruitment into militias to be child soldiers.

“Young men are being targeted by militias or the Taliban and are particularly vulnerable. Hazara boys are clearly being targeted.”

While immigration officials take into account an unaccompanied child’s age and lack of support when interviewing them, the law again makes no distinction between an adult and a child when it comes to processing their claims. And if their claims fail, unaccompanied children will be returned to their countries of origin.

Sri Lankans are facing return following the publication of a United Nations report indicating conditions in the country were improving, while the Prime Minister, Julia Gillard, confirmed Australia was looking at returning asylum seekers – including children – to Afghanistan. Newman says that fear of return is creating huge anxiety among the teenagers in Australia.

“They genuinely believe they have escaped. They are trying to escape a risk to their life and regardless of what the government might believe, these young people don’t believe that risk is gone.”

Fedayee says he eventually received the support he needed when he was removed from Woomera to be hospitalised for depression after trying to commit suicide six times. A migration agent, Libby Hogarth, came to visit him. With the help of Hogarth and a lawyer, Abby Hamdan, Fedayee was granted a protection visa, but only after the minister intervened in his case. When the government said he would have to live with an adult, Hogarth put up her hand.

The 26-year-old still lives with his “Australian family” in Adelaide, where he owns a small supermarket and drives a taxi.

“I work hard, to cover my depression, and because I want to show those people who were against us in Afghanistan that still, we are here.

“I get very angry and frustrated. I get angry when I think about God. What did I do wrong to go through this kind of situation? I was only a young boy.”
How Europe treats the issue

– Some detained on arrival for not travelling with papers

– Professional legal guardian appointed to each child, whether or not they file claims for asylum

– Younger children placed in asylum centres or with foster families

– Difficult to enrol in schools until long-term accommodation found

– Each child gets a social worker, a legal representative and access to Refugee Council’s “Panel of Advisers”

– Reception centres for new arrivals – those aged under 15 go to foster care, 16- and 17-year-olds go to hostels or apartments

Source: UNHCR report, Trees only move in the wind: A study of unaccompanied Afghan children in Europe, June 2010.