You are at:Home»News»‘1325 Civilians Killed in Afghan War This Year’ 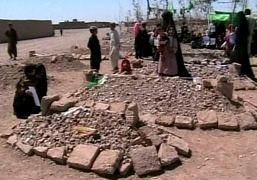 By Hazara People on August 8, 2010 0 Comments
Share this story According to a report published by AIHRC, the civilian death rates in Afghanistan, mostly committed by the government opposition forces, have been increasing since 2001.

“67.5 percent of civilian deaths have occurred due to the attacks by the government opposition forces,” a spokesman for AIHRC, Nadir Naderi told reporters.

“About the Taliban who encourage people to vote for a specific candidate, I personally think this is a good action, but the people of Afghanistan must act responsibly,” said head of AIHRC, Sima Samar.

The commission says one candidate has been killed and two others have been kidnapped since the start of the parliamentary election campaigns.

It says the opposition forces in some parts of the country have threatened to prevent elections.