You are at:Home»News»The Bottom Line in Afghanistan 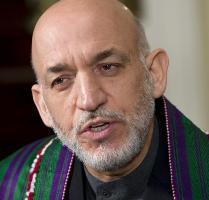 The Bottom Line in Afghanistan

At last! The best excuse for the mistaken “war” in Afghanistan is “nation building.” Rick Stengel, editor of Time, finally identified nation building as the strategy or goal this morning on Morning Joe. Defending Time‘s cover article of the wonderful rights given some women in Afghanistan during the past nine years and insisting that we couldn’t leave now for fear that they would go back to selling their daughters, Stengel gave approval to the policy of nation building or force feeding democracy in Afghanistan. This morning’s argument never got to the bottom line question: “Can you ask GIs to give their lives for nation building?” My answer is no. When we failed to commit the troops in August of 2004, I stated in the United States Senate that the effort in Afghanistan was no longer worth the life of an additional GI. And we ought to get out. President Eisenhower noted that democracy was not a hundred yard dash but an endurance contest. Bottom line: We can’t ask GIs to get killed as we endure for democracy in Afghanistan.

After nine years the counterinsurgency strategy or nation building strategy is for a Marine not to instantly return fire coming from a row of houses as he moves forward. He is supposed to stop and call headquarters to get permission to return fire — all the time praying that he doesn’t get killed while headquarters makes up its mind. GIs and Marines are taught for war — to continue going forward under fire. We’re killing less civilians, but more GIs, under this strategy. But we’re ruining our armed forces. Killing is the policy of the Pentagon. Bottom line — we shouldn’t change Dale Carnegie’s field manual of “lavishing praise” to make friends to “getting killed” to make friends.

Stengel assumes that Afghanistan is now a democracy, and extending women’s rights for a few more years will stabilize the country. We’ve already given up the North. We’ve already given up trying to change most of the warlords, and are only nation building in the populace South. We could stay in Afghanistan ten more years, giving women their rights, and the warlords and culture would immediately take over when we left. We can’t understand that we’re trying to change a culture in Afghanistan. I learned sixty-seven years ago liberating Morocco, Algeria and Tunisia that there are ideas more valued in the Muslim world than freedom and democracy. After sixty-seven years, Morocco, Algeria and Tunisia have yet to opt for democracy. Nor have any of the other Muslim countries. The only exception, Turkey, is constantly having its democracy restored by the military. Bottom line: You can’t ask GIs to die to force feed democracy; you can’t ask GIs to get killed to force feed a cultural change.

General Petraeus can write all the books on counterinsurgency he wants, but for counterinsurgency to work it takes time, money and casualties. The United States will take the time; the United States will borrow the money, but the United States will not take the casualties to make counterinsurgency work. Nor should we. I can see the thousands of Chinese spilling over the Yalu River in the Korean War. We withdrew to the 38th Parallel where we could take the casualties and get a peace agreement. After ten years in Vietnam, we proved that more were willing to die for communism than were willing to die for democracy. We killed more Vietnamese than we suffered casualties, but we properly withdrew. I have been to Hanoi and the people are happy. I saw the lake where John McCain landed, his old French prison, and that evening I walked around the streets unescorted, unprotected, which I wouldn’t dare do in parts of Washington, D. C. We can’t get it through our heads that there is a better way to influence people than employing the military to spread freedom and democracy. Spreading democracy in Afghanistan, we have created as much terrorism and as many terrorists as we have eliminated. The build and destroy policy in Vietnam changed in Afghanistan to kill and make friends. We now call it counterinsurgency. Bottom line: We are not willing to take, and we shouldn’t be willing to take, the casualties necessary for counterinsurgency to work in Afghanistan.

We are now arguing about whether a certain date next year for withdrawal was a good strategy or not. It doesn’t make any difference. Earlier this year we withdrew from a valley that we had been trying to take for five years. The Taliban took over. The Taliban had victory. The United States wasn’t willing to take the necessary casualties for victory. So the Taliban already knew, as they have known each day, that they were willing to take more casualties than the United States. After all, they were fighting for their country, and we were fighting for a country thousands of miles away. We learned in Charlie Wilson’s war that Afghans do not like foreigners and were willing to fight to the last man against foreigners in their country. Bottom line: There’s no education in the second kick of a mule.