You are at:Home»Videos»Kabul: Hazara Children in Painting Course »An Hazara boy is painting

An Hazara boy is painting 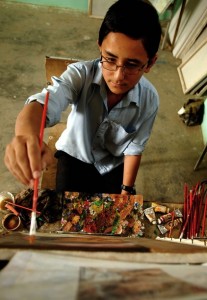 An Afghan boy paints at his painting course in Kabul, 01 October 2007. During the Taliban regime many of the arts such as music, photography and painting, specially for girls and women, were banned as they were believed by Taliban leaders to be against Islam. AFP PHOTO/MASSOUD Hossaini (Photo credit should read MASSOUD HOSSAINI/AFP/Getty Images)