You are at:Home»Refugees»Europe»Greece: Irregular migrants and asylum-seekers routinely detained in substandard conditions 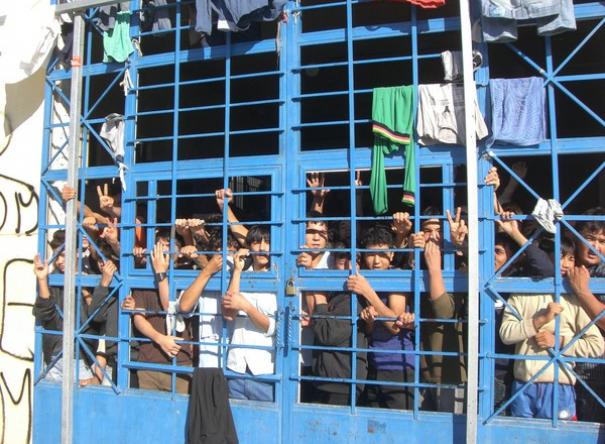 A family of Hazara asylum-seekers from Afghanistan (father, mother, three-year old daughter and the mother’s brother) had been arrested for attempting to leave the country with false documents in December 2008. The criminal court gave the adults a suspended six-month sentence, a €3,000 fine, and ordered their judicial deportation. The family was reported to have been tried without the presence of a lawyer or an interpreter. They were detained together for four months in a borderguard station in the north of Greece under reportedly poor conditions, and were subsequently separated. The mother and her daughter were transferred to a women’s prison facility in Thiva and the two men to Korydallos prison. The family did not manage to apply for asylum until their transfer from the borderguard station to the prison facilities. The mother is reported to have only learnt the grounds of her detention after her transfer.
In August 2009, the Thiva Misdemeanours Court rejected the mother’s objections against the judicial deportation order, despite the fact that her deportation could not be effected because of her status as an asylum-seeker and of the fact that she did not have a passport.63 The mother and daughter remained in detention for 15 months (they were released in March 2010) solely for the purpose of effecting the mother’s judicial deportation.

A., an ethnic Hazara, arrived irregularly on the island of Samos on 10 December 2009. He presented himself voluntarily to the Vathi police station because he wished to seek protection and was automatically detained.
During his detention, A. told Amnesty International that he was interviewed by an officer who spoke to him in Arabic and in English. On the basis of its own interview, Amnesty International concluded that A. spoke very little English. A. told the officer that he was from Afghanistan and was a minor. Nevertheless, A was registered as an Iranian and an adult.
After a few days, A. was transferred to the Samos immigration detention centre. He told Amnesty International that, although he wanted to apply for asylum, no one informed him about asylum determination procedures, and neither did he see any information leaflet about this.