You are at:Home»Art»The epic story of “Chehel Dokhtaraan” (The Fourty Girls) in Uruzgan 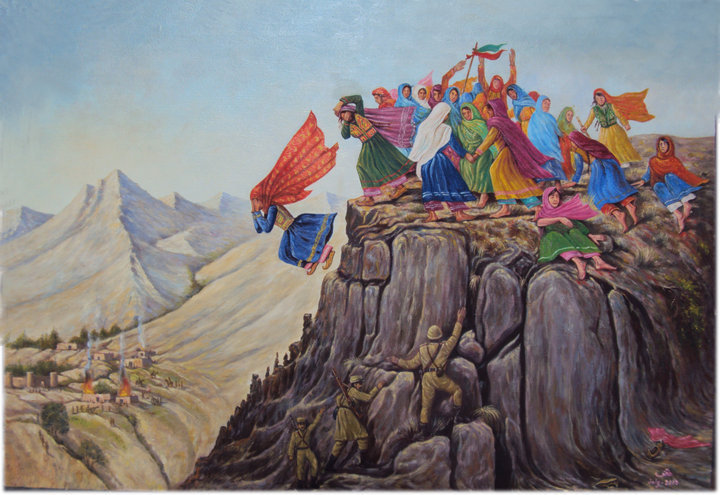 The epic story of “Chehel Dokhtaraan” (The Fourty Girls) in Uruzgan

The people of Ururzgan were justly and bravely defending themselves against the violent attacks by 120 thousand government troops with 40 thousand tribal troops recruited from the southern regions of the country. They were all led by Amir Abdur Rahman who was the ruler of Afghanistan at that time. When the people of Uruzgan lost the battle, these troops flooded the streets in Uruzgan attacking innocent people. Children were being beheaded in front of their parents, the captured women’s breasts were cut off and their dead or half dead bodies were thrown in Uruzgan river. These are just a few examples of the many atrocities and crimes that were committed by Abdur Rahman and his army. There were massacres occurring in every street, fire and blood were visible in every corner of Uruzgan. In one corner of the city, 47 Hazara girls were still resisting those violent attacks. However, when they realised that they were being surrounded by more and more troops, they escaped to the Shashpar Mountains. The troops did not stop. They followed them up to the top of the Shashpar Mountain. The 47 girls were very close to being arrested. To them, being arrested by those troops was worse than death. Being arrested meant accepting violation of their dignity and modesty. So they were ready to do anything to avoid being captured. In the end, they saw no other option but to jump off the top of the Shahpar Mountains and let the rocks be coloured by their red blood so that history remembers their epic story to remind us of what those girls did to protect their dignity and pride. After that day, those mountains were renamed to “Chehel Dokhtaraan Mountains”. There are also poems written as a tribute to those girls.

During Amir Abdur Rahman’s rule, anyone, Pashtun or non-Pashtun, who were against the government or the English were sent straight to Kabul, where his palace was located. They would never return home alive. Prisoners captured from Uruzgan included 400 women. Just like the “Chehel Dokhtaraan” they did not accept being prisoners for the same reason. They jumped in the river on their way from Uruzgan to Kabul and let their suicide be an example of freedom before imprisonment.

These are all due to the atrocities and crimes committed by Amir Abdur Rahman the ‘Cruel’.

According to the artist Hussan Ali Hatef, this is his preliminary plan of an artwork about the epic story of the “Chehel Dokhtaraan”. It is worth mentioning that the actual artwork will be much larger.