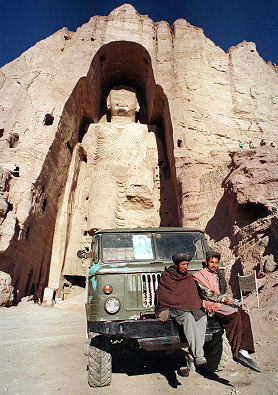 Afghan fears over a Taliban deal

By Lindsey Hilsum, Updated on 19 July 2010
As Afghanistan’s President Hamid Karzai moves to negotiate with the Taliban, International Editor Lindsey Hilsum travels to Bamiyan, to meet the female governor who fears that her people will be the ones “to have to make sacrifices”.

Afghanistan’s only female provincial governor has a dilemma. Habiba Sorabi knows that her poor but peaceful province of Bamiyan cannot develop unless fighting stops elsewhere in the country.

But as President Hamid Karzai moves towards negotiations with the Taliban, she fears that the rights of women and her minority Hazara people will be surrendered for a peace deal. “It’s always we women who have to make sacrifices,” she said.

This week’s Kabul conference, to be attended by Hillary Clinton, the US secretary of state, William Hague, the foreign secretary, and 40 other foreign ministers, is expected to grant approval for Karzai’s “re-integration and reconciliation” programme, an attempt to accommodate the Taliban.

Afghan aid
The UK will send an extra £200m of aid to Afghanistan over the next four years, International Development Secretary Andrew Mitchell will announce today. The 40 per cent boost in funds will go towards stabilising insecure areas and strengthening the Afghan government and economy – schemes which should help speed up the return of British troops, Mr Mitchell will say in Kabul ahead of a major international conference on the country’s future.

Many in Bamiyan are sceptical and scared. They live under the massive empty rock niches where the 6th-century Bamiyan Buddhas stood until they were dynamited by the Taliban in 2001 for being un-Islamic.

Under Taliban rule, hundreds of Hazaras – who make up about 70 per cent of Bamiyan’s population – were massacred and tens of thousands fled. The Taliban, who are mainly Sunni Pashtuns from southern Afghanistan, despise Hazaras, who are Shia Muslims.

“Safety and peace in the country is important, but what kind of price do we want to pay?” said a former official. “Hazaras will be the first to be sacrificed. It’s not an issue of freedom but of survival.”

For the moment, Sorabi can go out and talk to people in her province whenever she wants, accompanied only by a handful of armed police. “I am lucky,” she says, “I can move freely.”

Just over 100 New Zealand soldiers staff a provincial reconstruction team, helping with development projects. But local people fear what will happen if the team leaves as planned next September.

“If they leave us even for just one day, people will come and destroy us. The Taliban will kill us,” said “Baba” Muhsini, 60, who fought the Russians in the 1980s. “To tell you the truth, we don’t believe Karzai,” he said. “He’s not trustworthy. He wants only Pashtuns to be in power.”

As a Karzai appointment, Sorabi is unwilling to criticise the president but she is well aware of the creeping menace of the Taliban just beyond Bamiyan’s borders. Traffic is often attacked in Baghlan province to the northeast. Foreigners are advised to fly, not drive, to the province.

At a security meeting in her office last Thursday, the governor, wearing her customary long skirt and jacket with a cream headscarf, presided over a gathering of 25 men, ranging from an American commander to local police chiefs.

Her greatest success, she said, after five years of lobbying, was finally getting road construction under way. The province has fewer than four miles of paved road, and what would be a three-hour journey to Kabul on tarmac can take eight hours or more.

She dreams of a museum, and 1,000 hotel beds near the cave complex where the Buddhas resided, but it is hard to see how Bamiyan can attract tourists if it is almost impossible to get there.

There are glimmers of hope. Although the Taliban destroyed the rock sculptures and defaced ancient cave paintings, a small group of Japanese conservationists is carefully restoring some of the art. Plans to reconstruct the giant Buddhas have not been agreed.

Sorabi complains that aid has been concentrated on conflict-ridden provinces such as Helmand at the expense of Bamiyan, which still has no mains electricity. In Bamiyan town centre, children strap plastic jerry cans to donkeys to collect water from a spring. Bamiyan’s poverty reflects the lack of influence that Hazara politicians, including Sorabi, have in Kabul – a problem that would be exacerbated if the Taliban became part of central government.
Two fighters of the Hezb-i-Wahdat militia enjoy the sunshine near the 55-meter-high Buddha statue
Bamiyan is ahead of the rest of the country by one measure: girls’ education. In the last two years, school enrolment of girls has risen by a third. In some provinces 90 per cent of rural girls are not in school.

“Girls of 18 or 19 aren’t allowed to study because the teachers are all men, so that’s why I want to be a teacher,” said one. Families in Bamiyan are reluctant to let their teenage girls study with male teachers, hence the urgent need to train girls to teach.

“Men think women can’t be teachers but we want to break this barrier; we want to tell them we’re human like them,” said Aqila, 18.
Despite being a governor, Sorabi has not been invited to the Kabul conference, but she knows what she would say to Hillary Clinton: “She shouldn’t forget Afghan women. When it comes to negotiations with the Taliban, this is very important – the rights of women shouldn’t be neglected.”