You are at:Home»Refugees»Australia»Hazara refugees: Afghanistan not safe for us 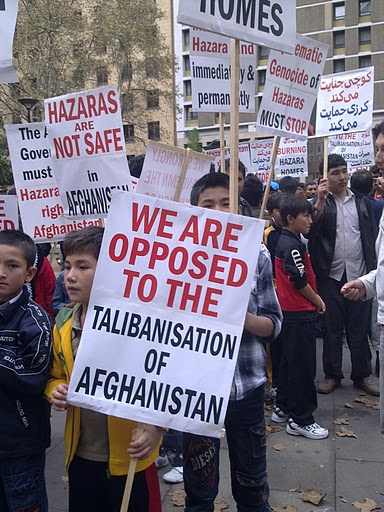 Hazara refugees: Afghanistan not safe for us

By Pip Hinman,
SYDNEY, May 30, 2010 — A national mobilisation by a newly-formed Australia Hazara Council today brought 1000 Hazara refugees into the streets in the centre of Sydney. They were protesting the Karzai regime’s “Talibanisation” of Afghanistan, through which their land, livelihood and families are being displaced by the Taliban, under the nose of the Western occupation forces.

The conditions for the persecuted Hazara minority in Afghanistan, in particular, are unsafe and not improving, according to Riz Wakil a Hazara community spokesperson.

“For over 100 years under different Pashtun rulers and under the Taliban, Hazara have been persecuted and were forced to leave. It is the same under the Karzai government and the nose of the US-NATO forces”, Riz Wakil, another Hazara community representative, commented.

“In the light of increasingly vicious attacks by Kochis and Taliban, the Australian government has suspended the Hazara application for protection. This is concerning for us.

“We are horrified about opposition leader Tony Abbot’s announcement that he would reintroduce Temporary Protection Visas and keep people indefinitely in on-shore processing centres. We have lived through it all under John Howard’s inhuman policy. Seeing it come back is simply unacceptable”, added Wakil.

The rallies called for support to stop the continuing persecution of and violence against Hazaras by the Taliban and Karzai government forces. Protests were also held in Perth, Melbourne and Canberra. A similar protest will be held in Brisbane on June 6.