You are at:Home»Refugees»Australia»Sending Hazaras back to Afghanistan ‘extremely dangerous’ 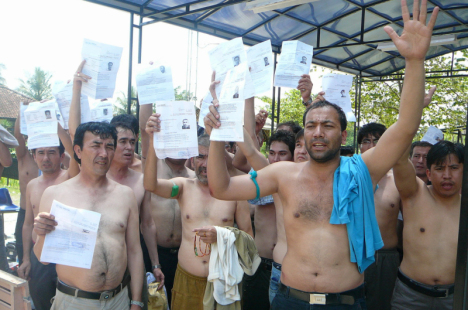 By Hazara People on July 7, 2010 0 Comments
Share this story

THE Afghan refugee Ataullah Naseri who is now Australian citizen says two schools were burnt down last week in his village in Ghazni province and a principal was killed.

Panicked, he rang his family and was told the Taliban was again in control of Qarabagh, the mixed Hazara and Pashtun district he fled in 2001. ”The government had some kind of checkpoint and security – they are all gone. It is extremely concerning,” Mr Naseri, 28, an ethnic Hazara living in Brisbane, said.

William Maley, an Australian National University expert on the Hazara, said: ”On the day Julia Gillard became prime minister, 11 Hazaras travelling in a vehicle in Oruzgan, the province where our troops are deployed, were waylaid by the Taliban and had their heads cut off.”

He said it would be ”extremely dangerous” to send any Hazara back to Afghanistan.

As Ms Gillard prepares to make a statement on asylum policy, more than 800 Afghan asylum seekers have had claims frozen. Before the freeze, imposed on April 9, 768 Afghans had been granted permanent refugee visas this year. Only two Afghans have returned home this year.

A principal solicitor at the Refugee and Immigration Legal Centre, David Manne, said he was ”profoundly concerned” that Hazara Afghans who would have once been routinely accepted as genuine refugees had in recent weeks had their claims rejected by Australian officials.

”We are seeing early signs of a shift in decision-making,” said Mr Manne, who has returned from briefings with the United National High Commissioner for Refugees’s office in Geneva.

The Herald reported last month that the federal government was laying the foundation to deport rejected asylum seekers to Afghanistan, including deploying immigration officers to Kabul and establishing a housing centre.

But Professor Maley, a former Afghan election observer, said there wasn’t an Afghan specialist in the world who would say the situation was improving. ”Most are of the view that it has deteriorated markedly.”