You are at:Home»Refugees»Australia»Kuchis Must Leave Hazarajat: Protesters in Brisbane 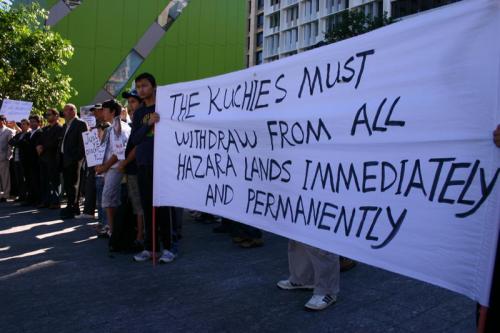 The Hazara people of Brisbane Australia held a protest demonstration on June 06 against  the Kuchi invation of Hazarajat. The speakers included David Ford of Amnesty International, Sandra Barlie from Australian Green Party, Freddie Steen, a human rights activit, Hassan Ghulam, Chaman Sha Nasiri, Ataullah Naseri and others. They condemned the Kuchi attack in Hazarajat and asked the international community to intervene the massacre of Hazaras at the hands of Taliban. Speakers were of the view that Karzai Government supports Taliban. The speaker from Amnesty International said “We are deeply concerned about the recent attacks on Hazaras in Afghanistan.”

Other speakers said the conflict between Afghanistan’s Kuchi nomads and Hazara villagers in district of Behsud and Daimirdad in Maidan-Wardak province, Qarabagh and Nahor District in Ghazni province is dividing the government, polarizing the country and potentially boosting the Taliban. But The Karzai government has done nothing to prevent the Taliban Kuchi’s invasion of Hazara lands. In fact, Karzai’s inaction encouraged the nomads to invade Hazara areas,”.

Hazaras have been persecuted and forced to flee for over a hundred years under different Pashtun rulers, the Taliban and now by the Karzai government beneath the nose of NATO forces,”. Hazara people have been denied their basic human rights and protection by the occupation forces, “The Hazaras in Afghanistan have been stripped of their basic rights, the right to food by having Kuchi flocks to graze their harvest. We have also missed out on the billions of dollar poured in Afghanistan. Now we are forced to leave our lands.” “The Hazara community from Australia, want an end to this centuries old cruel practice. We want peace and long term security,”

“We as the Australian Hazara community request  the international community  to intervene and stop the systematic genocide of Hazaras and brings those who have committed crimes against humanity to justice,”

“We also thank the Australian nation for providing us with an opportunity to live in a safe and secure country, but for a large numbers of Hazara peace and security is denied in Afghanistan”.