You are at:Home»Refugees»Australia»Protest in Adelaide Against Kuchi Invasion of Behsud 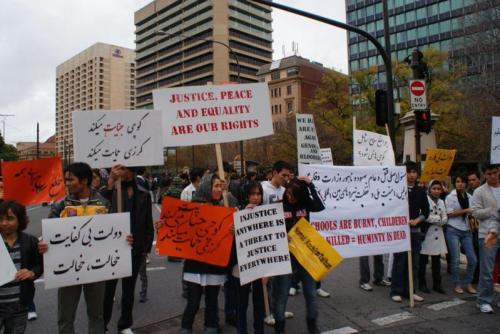 Protest in Adelaide Against Kuchi Invasion of Behsud

Abbas Daiyar,
About a thousand protesters in Adelaide city of Australia protested against the Behsud invasion by Kuchi. The protesters rallied from Victoria Square and marched through King William Road to the Parliament house of South Australia. Protesters were carrying placards with slogans such as “Hazara Rights are Human Rights”, “Stop the systematic Genocide of Hazaras”.

The speaker Mr. Ahmad Amani and others talked about the situation in Behsud and condemned the Government of Afghanistan for taking no serious steps to resolve this issue forever. Other speakers included Besmellah Rezai, Hussain Rezait and others. They strongly demanded the international community in Afghanistan to take notice of the Hazara killings in Behsud.