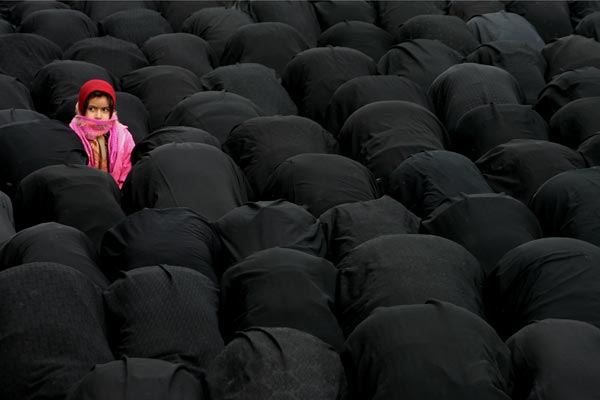 People eager to interoperate Quranic verses may do so using demagogy, but no one can deny the institutionalized violence against women based on those very verses and consequently the culture that takes its roots from Islam and its canonical principles. That is why it is obvious that even after collapse of Islamic regime in Afghanistan the struggle for equality of rights will not find its end.

“Men are in charge of women by [right of]what Allah has given one over the other and what they spend [for maintenance]from their wealth. So righteous women are devoutly obedient, guarding in [the husband’s]absence what Allah would have them guard. But those [wives]from whom you fear arrogance – [first]advise them; [then if they persist], forsake them in bed; and [finally], strike them. But if they obey you [once more], seek no means against them. Indeed, Allah is ever Exalted and Grand.” An Nesa verse 34.

Level of progress and prosperity of a society is interdependent with the level of socio-cultural growth of the society. Their involvement is a key issue in the process of development of a society. Despotism of religious dogma in Afghanistan prevents more than half of the population to take part in building their country. Hippocratic morality based on religious tradition doesn’t allow men to accept the concept of equality on the gender bases. Therefore women are facing extra difficulties in war-torn country that continues its struggle for survival. War, warlardism, produce and smuggling of drugs and instability, shadow economy, raise of criminal activities affect all afghans regardless all other parameters but they worsening life of women more than the men. All those challenges can effect the life outside the homes, but patriarchal system of life inside the families leave no chance for self-realization even in the framework of house and families.

Institutionalized female-phoebe has changed the viewpoint of women to themselves as well. They cannot behave confidently because they have accepted their role is not significant in the society and family. They have accepted the superiority of men. Females from the early ages are educated in a way to look at themselves as second hand category of human beings. School, education, scientific, social, cultural, economic and political carriers are only for men and only families with low degree of honour let their girl-kids to school. Since, according Islam, man is responsible to take care of financial aspect of family life, making a carrier for a girl is something unnecessary. Women’s natural desire of self-realization transforms into luxury, expensive jewellery, etc. with the lack of tradition of ads of women belongings, most of the jewellery lacks even ordinary taste. As soon as you enter a wedding ceremony you will often see women with one kilogram jewellery on them.

Is that possible for such a woman to grow up new generation full of imagination and creativity? Women who themselves accepts wrong concepts that are based on religious and backward costumes? Family is the first place (the cradle) we are educated. Our moral principles, our mentality, our concepts of good and evil and our information on world as it is get formed inside the family. And mother is the first educator who, by her own behaviour forms our every thing, including our personality. That is why an educated, modern mother is so needed in our families.

There were some publications written by Muhaqeq Nasab and Latif Pedram about women rights. They were brought to court soon after those articles were published. We have plenty of organizations that are refisted as human and women writs protectors but no one of them did anything to protect Muhaqeq Nasab and Pedram simply because the female managers of those organizations did not find themselves worthy or brave enough to interfere. It is not a secret that most of those organizations are just for show case to demonstrate so called loyalty of the government and positive achievements of international intervention to Afghanistan.

It is not enough to criticize the female-phoebe habits and discriminative laws in order to equalize the rights of Afghan citizens regardless to their gender. We need to either reform Islam as it was done in some other religious, for instance Christianity or to propagate for critical rationalistic approach toward religious and traditions because most of the customs and laws are based on religious and traditions.

One can find a great number of verses that are against human rights. Life of any ordinary women in Afghan society is a good illustration of cruel violence of human, especially women rights in name of God. Girls are not allowed to study at schools because it is said, “the ability of reading Quran is enough for a woman”. Then she is forced to marry someone she doesn’t know. And she has to live with him her entire life. Religious based costumes practically leave no options for women who don’t want to live with their husbands- a husband that she has not even chosen. As a result any afford toward institutionalization of women rights in an Islamic society can be considered as an infidel act of non-believers.

Here are some verses of Quran, which are controversial to fundamental concepts of human rights of women:

O you who have believed, prescribed for you is legal retribution for those murdered – the free for the free, the slave for the slave, and the female for the female. But whoever overlooks from his brother anything, then there should be a suitable follow-up and payment to him with good conduct. This is an alleviation from your Lord and a mercy. But whoever transgresses after that will have a painful punishment.

And they ask you about menstruation. Say, “It is harm, so keep away from wives during menstruation. And do not approach them until they are pure. And when they have purified themselves, then come to them from where Allah has ordained for you. Indeed, Allah loves those who are constantly repentant and loves those who purify themselves.”

Divorced women remain in waiting for three periods, and it is not lawful for them to conceal what Allah has created in their wombs if they believe in Allah and the Last Day. And their husbands have more right to take them back in this [period]if they want reconciliation. And due to the wives is similar to what is expected of them, according to what is reasonable. But the men have a degree over them [in responsibility and authority]. And Allah is Exalted in Might and Wise.

And if he has divorced her [for the third time], then she is not lawful to him afterward until [after]she marries a husband other than him. And if the latter husband divorces her [or dies], there is no blame upon the woman and her former husband for returning to each other if they think that they can keep [within]the limits of Allah . These are the limits of Allah , which He makes clear to a people who know.

There is no blame upon you for that to which you [indirectly]allude concerning a proposal to women or for what you conceal within yourselves. Allah knows that you will have them in mind. But do not promise them secretly except for saying a proper saying. And do not determine to undertake a marriage contract until the decreed period reaches its end. And know that Allah knows what is within yourselves, so beware of Him. And know that Allah is Forgiving and Forbearing.

And if you divorce them before you have touched them and you have already specified for them an obligation, then [give]half of what you specified – unless they forego the right or the one in whose hand is the marriage contract foregoes it. And to forego it is nearer to righteousness. And do not forget graciousness between you. Indeed Allah , of whatever you do, is Seeing.

O you who have believed, when you contract a debt for a specified term, write it down. And let a scribe write [it]between you in justice. Let no scribe refuse to write as Allah has taught him. So let him write and let the one who has the obligation dictate. And let him fear Allah , his Lord, and not leave anything out of it. But if the one who has the obligation is of limited understanding or weak or unable to dictate himself, then let his guardian dictate in justice. And bring to witness two witnesses from among your men. And if there are not two men [available], then a man and two women from those whom you accept as witnesses – so that if one of the women errs, then the other can remind her. And let not the witnesses refuse when they are called upon. And do not be [too]weary to write it, whether it is small or large, for its [specified]term. That is more just in the sight of Allah and stronger as evidence and more likely to prevent doubt between you, except when it is an immediate transaction which you conduct among yourselves. For [then]there is no blame upon you if you do not write it. And take witnesses when you conclude a contract. Let no scribe be harmed or any witness. For if you do so, indeed, it is [grave]disobedience in you. And fear Allah . And Allah teaches you. And Allah is Knowing of all things.

All these verses are from one Sura Baqara. One can find lots of them especially in Sura Noor, Al ahzab and Al nessa.