You are at:Home»Human Rights»Women protesters against ‘marital rape’ law spat on and stoned in Kabul 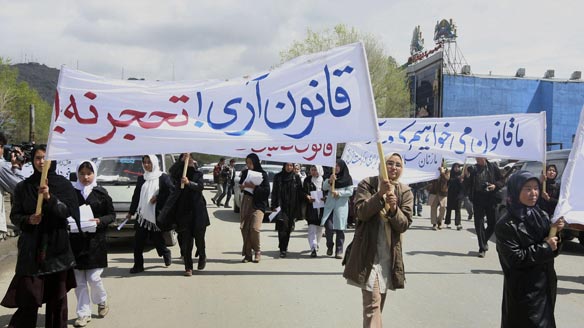 Tom Coghlan in Kabul, April 16, 2009
A group of Afghan women who braved an enraged mob yesterday to protest against an “abhorrent” new Afghan law had to be rescued by police from a hail of stones and abuse.

The protest by about 200 women, unprecedented in recent Afghanistan history, was directed at the Shia Family Law passed last month by the Afghan parliament which appears to legalise marital rape and child marriage. 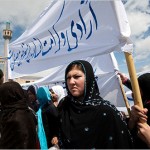 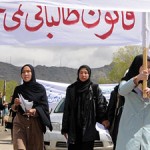 The rally, staged by mostly young women with their faces exposed, was a highly inflammatory act of defiance in a country as conservative as Afghanistan. It provoked a furious reaction from local men and a rapidly expanding mob threatened to swamp the demonstrators as they tried to approach the Afghan parliament.

“Go home if your mothers and fathers are Muslims,” one Shia cleric shouted at the protesters, who were pressed into an ever-tighter huddle as the crowd surrounded them. “These people will beat you if you stay.”

Some of the women appeared cowed by the aggression, staring blankly at the ground, but one shouted back: “If you were Muslims, you wouldn’t pass this law.” As the protesters continued to chant slogans they were often drowned out by counter chants of Allahu akbar (God is greatest). “I am not afraid. Women have always been oppressed throughout history,” Zara, an 18-year-old student, told The Times as men in the crowd lunged forward and screamed abuse.

“This law is against the dignity of women and all the international community opposes it. The US President calls it abhorrent. Don’t you see that actually we are the majority?”

The baying mob tore down banners, spat on demonstrators and hurled stones. As police struggled to maintain order, at one point the women appeared to be in danger of disappearing under a sea of shaking fists.

Women police officers drafted in to help to oversee the march attempted to link arms around the female protesters and riot police eventually succeeded in separating the rival groups sufficiently for the march to continue.

The new law, which applies to the 15 per cent of the population who are Shia Muslim, has drawn widespread international condemnation. President Obama called it “abhorrent” after leaked drafts of the law showed it was reintroducing restrictions on women imposed by the Taleban during their harsh reign. Carrying banners proclaiming “We want dignity in the law” and “Islam is justice”, the women’s march was initially matched by a peaceful counter-demonstration of 300 female religious students from Khatam-ul-Nabieen Shia University in Kabul, who were supporting the new law. The university is attached to the city’s largest Shia mosque, which receives Iranian funds and is overseen by Mohammad Asif Mohseni, a leading Shia cleric who has strongly backed the new law. Most of the women protesters were ethnic Hazaras, who make up the vast majority of Shias in Afghanistan and who have historically been a systematically downtrodden minority. Many were students from Kabul University, though there were also older women and a handful of Hindus and Sikhs among the protesters.

Local sources suggested that some of the protesters were members of the Revolutionary Association of the Women of Afghanistan, a secretive women’s rights organisation with Maoist origins founded in the 1970s.

“We think those who oppose this law in fact oppose the Koran,” said Nesa Naseri, a female student of Sharia Studies who took part in the women’s counter-demonstration.

“This law does not approve rape, it is rather about loyalty of wife to husband and husband to wife. Rape is what you can see in the West, where men don’t feel responsibility for their wives and leave them to go with several men.” The Afghan Government has nonetheless announced a review of the legislation, which has yet to come into force.

President Karzai’s political opponents have suggested that he backed the law as a sop to powerful Shia religious parties before presidential elections in August.

Though the Afghan Constitution enshrines sexual equality before the law and Afghanistan is a signatory to the Universal Declaration on Human Rights, conservatives argue that the Article 3 of the Constitution, which permits nothing contrary to the“beliefs and provisions of Islam”, takes precedence over all others.

87% of women are illiterate

1 in 9 dies in childbirth

1 in 3 subjected to violence