You are at:Home»Human Rights»Genocide»“Meaningful” silence of media About genocide in Afghanistan 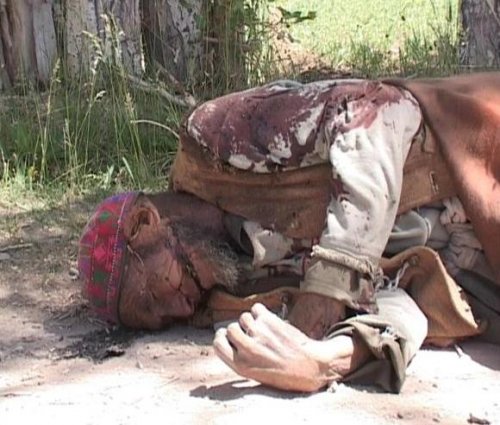 A Hazara man who killed by Pashtun Nomads in Behsud
Genocide

“Meaningful” silence of media About genocide in Afghanistan

By Hazara People on July 17, 2008 0 Comments
A Hazara man who killed by Pashtun Nomads in Behsud
Share this story

The history of hazara’s genocide started in the period of Abdullrahman Khan at the end of 19 century, when Britannia thrones and dethrones Afghan kings from British India. Britannia always supported a sunny Pushton government in Afghanistan. “By sending Sunni clerics to every village in Hazarajat Abdur Rahman forced the Hazaras to attend Sunni mosques and abandon shiism. He imposed tougher regulations on Hazaras by forcing them to pay heavy taxes.”1

The first “mission of Taliban was deletion of Hazaras from Afghanistan.

Genocide Watch, International complain to ends genocide, reports: “Taliban have demonstrated their capacity for genocidal violence in massacres of civilian members of the Hazara Shi’ite ethnic minority in Mazar-e-Sharif in August 1998, Robatak Pass in May 2000, and Yakaolang in January 2001.”2 Just in Mazar-e-Sharif Taliban killed 8-12 thousand Hazaras and Uzbeks.

Genocide of Hazaras continues by Karzai regime in presence of international force in Afghanistan. Dr Rauf Roashan writes in his research article: “Any keen student of history would easily find parallels in the era of the last 19th century Amir of Afghanistan and those of contemporary Karzai times. An even keener observer would extend the parallel also to the American Wild West era of the rule of the gun, Billy the Kid, local sheriffs, US marshals and gunmen of all sorts.”3

When British were in India King Abdullrahman Khan was Killing Hazaraz, now British in Afghanistan, Karzai continues genocidal crime of his ancestors. District of Behsood, province Wardak in Afghanistan is a place of genocide, which continues till this moment I write this article. 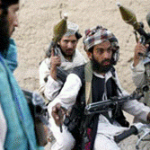 A Hazara man who killed by Pashtun Nomads in Behsud 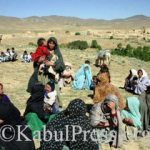 Who supported nomadic people? In an interview Afghan-Canadian journalist Mir Hossain Mahdavi characterizes their relationship to Karzai government. “If we say that kochis are not Taliban, but we can say they’re supported by Taliban. If Karzai want democracy, he don’t need play with ‘lion tail’. Nomadic people is a lion tail for Karzai.”, said Mir. Also in an interview by telephone Afghan scholar Hamza waezi in Norway thinks “Nomadic people a victim too, they uses as a political tool by governments. They have negative role in afghan society an government destroyed their relationship to Afghan society.” said Waizi.

Nomadic people from Pakistan come to Afghanistan with the weapon and transportation, which uses by Taliban. They kill the Afghan citizen, who live and work in their own houses and land. Taliban by the name of nomadic people kill Hazaras, who gave their weapon to UN group, which called DDR.

Pushton President from Kandahar helps Pakistani pushtons to settle them in Afghanistan and change the balance of Afghan population on rest of the poshtons in Afghanistan. They kill tights and deport Hazara ethnicity. To Pakistanize Afghanistan the sunny government kills Shiites. Than the mass killing of ethnical and religious group is obviously an action of genocide in Behsoom.

How is this happening? A Pushton political group “Afghan Milat”, which fights for power of Pushton and Pushto is the first language of Afghanistan, surrounded Karzai and turned Afghan government to full dictatorship.

They have contact with Pakistan intelligent services “ISI” (Islamic inelegance or inter-Services Intelligence).

They want to send the Pakistani nomadic people in Afghanistan and settle them in “Hazarajat” or Hazaristan(Land of Hazaras).

The next sign of genocide in Behsood is the historical character of the action, which continues from one Pushton dynasty in power against hazaras as a continuing revenge. The enmity and revenge of government to Hazara ethnicity. Karzai continues this tribal enmity, when he’s an ‘elected” president of Afghanistan under flag of “democracy” in presence of international forces.

Latest news from Behsood tells that killing and refuge continues and Karzai government keeps its silence.

Karzai is involved in this crime, because: first, he’s President of Afghanistan and he’s responsible for security of citizens. He’s grant of national unity in Afghanistan. He’s able to prevent attack of Pakistani foreigner to his jurisdiction. He can command army police and ask help from international forces. But he’s doing absolutely and obviously in opposite of his responsibilities. Karzai action and determinations for continuing genocide are as following:

Karzai was silent 2 months, when the peoples complaints was over, Karzai’s spokesperson person declared that nomadic people by the request of president will leave Behsood. What does it mean, when the president of a country ask outsider killers and spoiler to leave Afghanistan after mass killing and destruction?

2. This year Pakistani nomadic people attacked Behsood again and the same killing and destruction as last year and the process is continuing till now. Karzai has the same policy that had last year.

3. Three months before Pakistani nomadic come to Afghanistan, there is a Mass demonstration took place in Kabul. Demonstrators in a resolution asked President Karzai to prevent Pakistani attacks in Besood. Karzai did nothing to prevent the attack, but he prepared to help attackers. Before of the war Karzai sent a Governor to province Wardak, who belongs to Afghan Milat political group, which stimulates Pakistani nomadic people to come to Afghanistan and kill hazaras.

To conclude this article I want to mention relationship between the silence of Karzai, who is responsible to defend Afghan citizen, silence of United Nation that disarm Hazaras. Is any responsibility and promise, when they disarm them? Any legal or ethical document they sign?

How a “selected” government can govern by a small Political and ethnic people, who deliver ideology of fascism.