2: The copyrights holder of original posted and published information is Hazara People website. 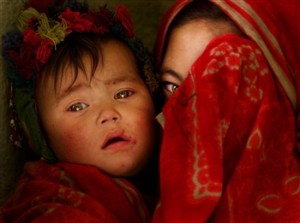 A Hazara girl covers her face as she holds a child in a cave in Bamiyan December 15, 2001. The destruction of the 2,000-year-old Buddhas, among the great wonders of the ancient world, was the first many people outside Afghanistan had heard of the Taliban or Bamiyan. But a story of human horror also unfolded in the town and the surrounding area as forces of the Sunni Muslim Taliban, fired by a perverse interpretation of Islam, forced tens of thousands of Shi’ite Muslims to flee into the mountains.

Source of above picture