You are at:Home»Human Rights»Genocide»Genocide of Hazara Community Reflects Horrific Treatment of Minorities in Pakistan 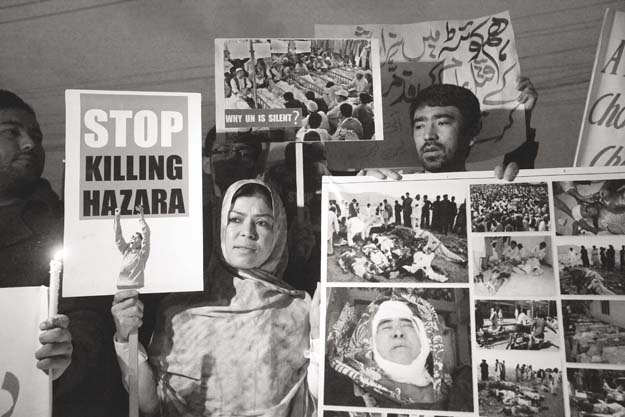 Renowned Pak columnist Irfan Husain in his article “Hazara massacre” dated 5th May in a leading Pakistani daily has brought out the tragedy of Hazaras in its macabre details. No journalist in Pakistan had ever written earlier about the Hazara ethnic/sectarian cleansing taking place in Baluchistan in Pakistan.

While Hazaras’ struggle for human rights began nearly two decades ago, Human Rights Watch (HRW) was probably the first to report about the rampant human rights violation in Pakistan a few years ago. “There is no travel route, no shopping trip, no school, or no work commute that is safe for the Hazaras.” Going by HRW estimates, at least 509 Hazaras have lost their lives in the campaign so far.

However persecuted Hazaras put the casualty figure close to 3000. The majority of Hazara population – reported to be around 9 lakhs— reside in Baluchistan out of which around 70,000 have fled, mainly to Australia, while hundreds may have drowned during this perilous sea journey. Those compelled or forced to stay live in two ghettoes in Quetta, literally imprisoned to a few kilometres, guarded by police and military check posts. They can never go out of this confined area; stepping out for shop or work place puts their lives at risk. They look forward to people in media and elsewhere for to highlight Shia killing and Hazara genocide, but alas! The daily horrors faced by the community recently forced Hazara women to stage a hunger strike in Quetta. They could not trust the promises of security made personally by the interior minister, but called off the strike only after meeting Army Chief General Bajwa reflecting the low credibility of political dispensation to protect them.

Asking for better living conditions, or schools, or jobs is too big a luxury for them. All they demand is to live with basic human rights enshrined in Constitution, international law and religious scriptures. The Lashkar-i-Jhangvi spokesperson accepted the responsibility for most of the Hazara killings of earlier years but divulged exacting vengeance on the community for the death of Osama bin Laden at the hands of American commandos. The slaughter of Pakistani Hazaras began in earnest after 9/11 when the Afghan Taliban secured safe haven in Quetta. Earlier they had killed Hazaras in thousands in Afghanistan for supporting the Northern Alliance; they continued the process in Pakistan. The Lashkar – i – Jhangvi and Sipah – i – Sahaba Pakistan now turn their guns from Taliban to Hazaras. The deadly Jhangvi member Malik Ishaq, was released on bail in 2011 and prominent Shia-hating extremists also broke out of jail to torment Hazaras.

The Supreme Court Chief Justice is conducting suo motu hearings of Hazara persecution in Quetta from second week of May. Currently the terrorist-land mafia nexus is forcing Hazaras to sell their properties at throwaway prices for fear of death. Will Chief Justice subside Hazara fears by disrupting orchestration from behind?

Baluchistan is deadly not only for Hazaras but also for Baloch nationalists and non-Baloch workers despite being the most heavily militarised province of Pakistan. Security establishment owes an answer. The intelligence agencies and paramilitary forces have contained the separatist rebellion, but allowed free hand to Laskhar-i-Jhangvi and the Sipah-i-Sahaba. The religious parties convene rallies supporting the Rohingyas but never even condemn Hazara killings.

The political and military dispensation in Pakistan has absolutely failed to implement the National Action Plan to end religious extremism. Mere cracking down on hate speech in television chat shows, classrooms and mosques would have ended the massacres of Hazaras who live amid intimidation and subjugation. Pakistan perambulates on its normal cycle of killings of minorities as politicians and the media shed crocodile tears. Pakistan needs honest internal dialogue within communities, various groups, regions and inter- communities, groups and regions.

Hazaras once held prosperous business interests in many Bara markets of the city, but have now systematically forced to sell at throwaway prices when target killings have hammered prices down. As the pathetic Hazara figure silently retreats to community enclave, the government, excessively obsessed with Kashmir, has no time for them.