You are at:Home»Hazaristan»Hazara Contemporary Figures»Sima Samar: The Woman of Action 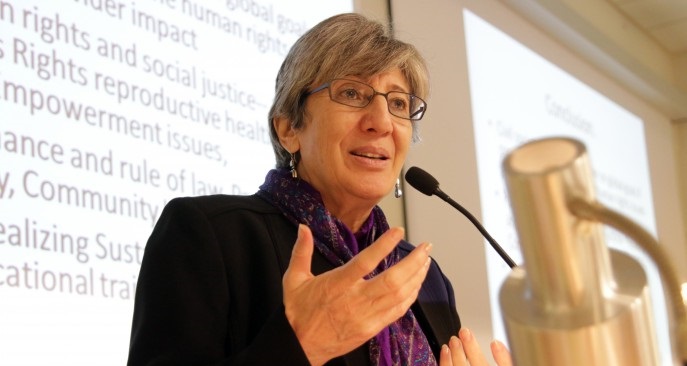 Sima Samar: The Woman of Action

Known as the ‘Woman of Action’, Sima Samar has been spending tireless efforts for promoting peace, education and human rights in Afghanistan since 1980s. Currently, she is serving as the Chairperson of the Afghanistan Independent Human Rights Commission (AIHRC).

Sima Samar was born in Jaghori District of Ghazni in Afghanistan in 1957. She completed her medical degree at Kabul University and worked as a doctor in a Hospital. However, in 1984, she fled to Pakistan due to conflicts in her country.

In Pakistan, Samar started her activities on providing school education and health services for refugees, particularly women and children. In 1989, she established the Shuhada Organization, which operates 12 clinics, 4 hospitals and have 71 schools in Afghanistan and Pakistan.

During the civil war and then under the Taliban regime, it wasn’t easy for a woman to work as an educational philanthropist and a human rights activist. However, Samar consistently continue her cultural and human rights activities despite serious challenges. She has said, “I have always been in danger, but I don’t mind”. She was secretly financing a few schools in Ghazni and Kabul due to security concerns during the Taliban.

From December 2001 to June 2002, Samar worked as the Deputy Chair and the first Minister of Women’s Affairs in the Interim Administration of Afghanistan. She also served as the Special Rapporteur for the Situation of Human Rights in Sudan from 2005 – 2009.

Samar has many achievements from her activities in Afghanistan and Pakistan and has received over 20 international awards and honors for her numerous services for her leadership in promoting education and human rights.