You are at:Home»Human Rights»Genocide»Four Hazaras Killed in a Terror Attack in Pakistan

Four Hazaras Killed in a Terror Attack in Pakistan

Four Hazaras including a woman were killed and one other was injured in Mastung District of Balochistan on Wednesday, July 20, 2017. 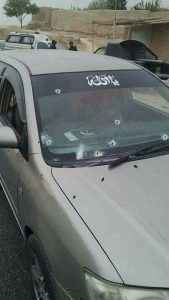 The incident happened early in the morning around 6:30 AM. A terrorist targeted the vehicle of the Hazara passengers who were traveling from Quetta to Karachi.

The bodies were identified as Rukhshana Bibi, Shulam Sarwar, Muhammad Asif and Murta. It said that all the victims are members of the same family.