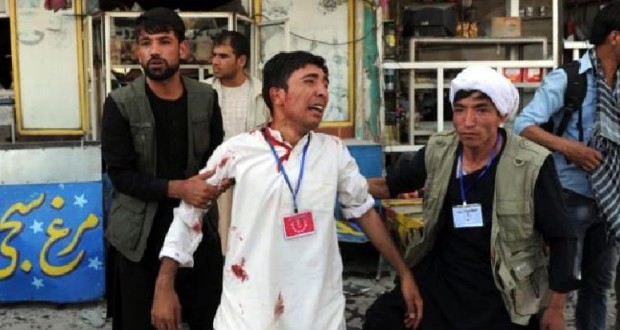 On November 21st at around 12:30pm a suicide bomber detonated his explosives among the hundreds of Hazara worshipers gathered inside the Baqir-ul-uloom mosque in the west of Kabul, Afghanistan. The attack left over thirty dead and many more wounded.

As the dusts of the deadly blast began to settle, ISIS’s Amaq news agency claimed that “A martyrdom soldier of the Islamic  State targets a Shiite Husayni temple in Kabul city.” This was ISIS’s third mass casualty attack on the Hazara community since July.

There are two reasons for ISIS’s attacks on Afghanistan’s long persecuted Hazara community. First, ISIS refers to the Shiites as the Rafidah (Arabic: the rejecters) and views them as heretics worthy of death. Hence, the Hazaras are legitimate targets. Second, ISIS seeks to ignite sectarian violence in the country. It has succeeded on its first objective, but failed on the second. The Hazaras, with centuries old scars of persecution and oppression, have refused to engage in sectarian violence. And after each attack, they have pointed their anger at their political leaders and the Afghan government for failing to protect them.

With scattered footholds in either side of Afghanistan and Pakistan borders, it is difficult to approximate the number of ISIS fighters in the region. In 2015, ISIS formally endorsed the Islamic State in Khorasan Province (ISKP) under the leadership of former Taliban commanders. The ISKP has since claimed responsibility for many attacks in Afghanistan and Pakistan.

Unlike in Iraq and Syria where ISIS uses Sunni political grievances against the Shiite and Alawite rulers to keep the flame of its extreme sectarian violence alive in order to sustain its Caliphate, the ISKP faces a dead end in Afghanistan.

The history of Afghanistan is awash with ethno-tribal war and bloodshed.  In the late 19th century, Amir Abdul Rahman Khan – the founder of modern Afghan state – sought help from the Pashtun clergy to help crush the Hazaras into submission. With the promise of land, wealth and women from the Amir, the clergy responded by waging jihad against the “godless” Hazaras. And in the late 20th century, some Taliban leaders also used sectarian justifications for the mass killing of the Hazaras. But both the Amir and the Taliban wars against the Hazaras were ethnic in essence. The latter also used sectarian sentiments to recruit fighters. In both cases, sectarian sentiments were used to serve wars of ethnic supremacy. And the factional civil war of the 1990s never turned sectarian.

Despite decades of civil war and foreign religious ideological push, sectarian prejudice has not permeated into the fabrics of the multi ethnic Afghan society, and ethnic identities have remained resilient. Ethnic and tribal identities have kept sectarian loyalties at bay.

Sectarian attacks have failed to move the Hazaras toward sectarianism. But they have deepened the community’s alienation from the Afghan government. Every attack is followed by strong condemnation and a promise of revenge, but nothing follows. For many, the Afghan government’s apparent indifference is part of the long standing systemic and institutionalised discrimination against the Hazaras. Despite constituting one third of Kabul’s population and approximately one fourth of the country’s population, the Hazaras have no high level positions in the Afghan capital’s security-police institutions.

Saudi Arabia enjoys close ties with Afghan Sunni political and religious leaders – the Afghan government officially sided with the Saudis on their war in Yemen. But the extent of Iran’s influence on the Hazaras is often exaggerated. In fact, the Islamic Republic has been on much better terms with most of Afghan Sunni leaders. The notorious Gulbuddin Hekmatyar lived in Iran before joining the war against the Western coalition forces, Hamid Karzai’s office received ‘bags of money’ from Iran during his presidency and the former Taliban leader, Mullah Akhtar Mansour, was returning from Iran when he was killed by an American drone.

The on-going conflict in the Middle East, and Iran’s recruitment of fighters from vulnerable refugee communities to fight on its behalf in Syria have further exacerbated security conditions for the Hazaras.

The Hazaras’ distinct ethnic and cultural identity and experience of centuries of persecution have shielded them from radical sectarianism promoted by Iran. Unlike the Shiites in Lebanon and Iraq and the Houthis in Yemen, the Hazaras have not provided space for Shiite radicalism to flourish. In the 1990s, the charismatic Hazara leader, Abdul Ali Mazari, refused to adopt a sectarian agenda in Afghan politics. And his refusal as such prompted Iran to support his rivals within and outside the community. And after his death in the hands of the Taliban in 1995, his successors followed the path he had set. Hence, the Hazaras have not produced their own Hassan Nasrallah or Muqtada al-Sadr.

For over a decade, the Hazaras in Quetta, Pakistan, have been subjected to a brutal campaign of sectarian violence by the Islamic militant group Lashkar-e-Jhangvi. But the besieged community has never responded in kind. Instead, they have pursued their demands for justice through peaceful means. Again, despite Iran’s extensive work through its Consulate and the Iranian Cultural House, which I witnessed first-hand, the Quetta Hazaras, with strong ethnic identity, have proved resilient to Shiite radicalism. Pursuing justice through peaceful means has become a cherished principle for the community at large.

Losing ground in Iraq and Syria, ISIS’s satellite affiliates will seek to orchestrate more deadly attacks. But the ISKP will fail in its pursuit of sectarian war in Afghanistan. And with the group’s defeat in the Middle East, the ISKP commanders will revert to their old loyalties.

Afghanistan will remain resilient to sectarianism. But with rampant corruption and ineffective governance, the future stability of the country is far from certain.