You are at:Home»Human Rights»Genocide»Afghan guards open fire at Kabul rally against Hazara deaths 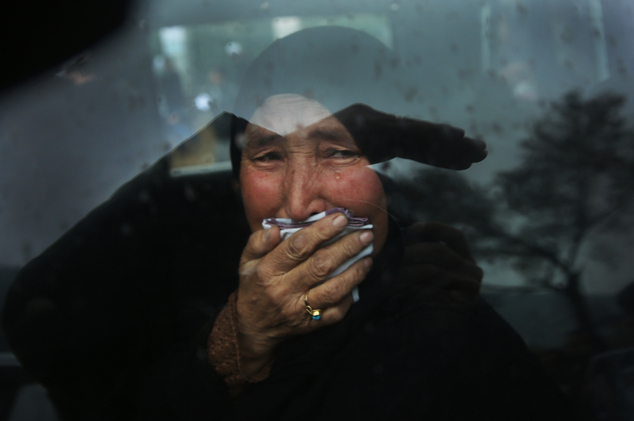 By Associated Press
KABUL, Afghanistan (AP) — Afghan presidential guards opened fire on Wednesday to disperse thousands of protesters marching outside the palace compound in Kabul to denounce recent abductions and killings of seven members of the Hazara Shiite minority.

The shooting, which the Public Health Ministry said wounded seven people, occurred as some of the demonstrators tried to scale the walls of the palace at Pashtunistan Square. It was not immediately clear if President Ashraf Ghani was inside the heavily fortified palace at the time.

Shortly afterward, Ghani went live on national television, appealing for calm and promising the Hazara deaths would be avenged. “The nation’s pain is my pain,” he said, vowing the authorities would have “no mercy” on the killers. 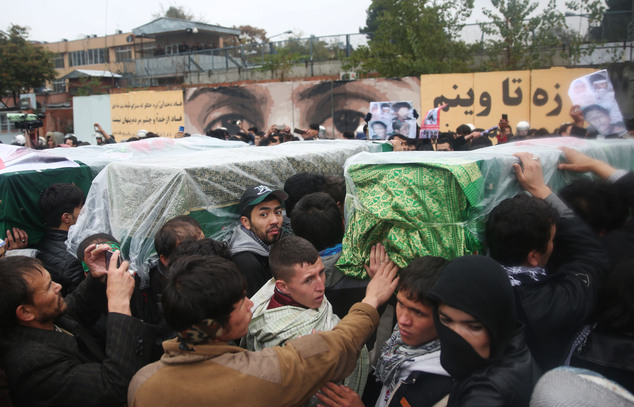 The coffins of ethnic Hazaras who were allegedly killed by the Taliban are carried during a protest march in the Afghan capital of Kabul on Wednesday, Nov. 11, 2015. Written on the wall in Farsi reads: “I see you.”(AP Photos/Massoud Hossaini)

Ghani said “enemies of Afghanistan” were trying to create disunity and “bring ethnic and sectarian violence” to the country as they had done in Iraq.

Earlier in the day, about 10,000 rallied in the center of the Afghan capital, carrying coffins of the seven Hazaras whose beheaded bodies were found on Saturday and calling for a new government that could ensure security in the country.

“About 100 people were trying to get into the palace by climbing over the wall,” said Ahmad Sharif, 36, who took part in the rally. He said he saw one protester hit by gunshots.

Kabul’s deputy police chief Gul Agha Rouhani said security forces shot in the air to disperse the protesters trying to scale the palace walls. He could not confirm reports of injuries.

Later, riot police took up positions at the gates as a tense calm returned to the crowd and people began to disperse.

The protesters had arrived at the palace gates after walking for almost four hours carrying the green-draped coffins of four men, two women and child whose bodies were found in the southeastern province of Zabul.

The protesters held banners and photos of the victims — including Tabasum, a nine-year-old Hazara girl — as they chanted “Death to the Taliban,” ”Down with the Government” and “Death to Pakistan.”

The seven were seized in neighboring Ghazni province up to six months ago, though it was never clear who was behind the abductions. Afghanistan’s spy agency dismissed Taliban claims that affiliates of the Islamic State group were behind the killings. In the past five days, rival Taliban groups have been fighting each other in the area where the bodies were found.

On Tuesday, the bodies were brought 380 kilometers (240 miles) to Kabul from Zabul. Protesters held an overnight vigil before beginning their march early Wednesday.

Ghani sent a delegation to Ghazni to investigate the killings, his office said, describing the abductors as “mainly non-local terrorists.”

The United Nations Assistance Mission in Afghanistan condemned the killings and said they may constitute a war crime. Killing and kidnapping civilians are “serious violations of international humanitarian law,” UNAMA chief Nicholas Haysom said and called for the perpetrators to be held accountable.

The Kabul marchers called on Ghani and his Chief Executive Abdullah Abdullah to resign. “We came to the front gate of palace to raise our voices for justice and to condemn all acts of murder in the country,” said Sakhi Rizayee 37, one of the organizers of the protest.

The demonstrators included members of all Afghanistan’s ethnic groups, according to activist Zahra Sepehr, who said the turnout was about 10,000.

This would make it the biggest demonstration in Kabul since the March killing of a young woman, Farkhunda Malikzada, by a mob enraged over false reports that she had burned a copy of the Quran, Islam’s holy book.

“We want justice and we want this government, Ghani and Abdullah, to go so that we can have a government that protects all the people of the country and brings security to the whole country,” Sepehr told The Associated Press.

The Taliban have stepped up their fight across Afghanistan this year in an effort to topple the government. The Islamic State group also has had an emerging presence, especially in Zabul and southeastern Nangarhar province, according to Afghan officials.

The insurgents have also linked up in some parts of the country with other militant groups, such as the Islamic Movement of Uzbekistan. Many IMU followers in Afghanistan, including those in Zabul, have declared loyalty to IS, officials have said.

Afghanistan’s Hazaras, who are predominantly Shiite, have been attacked in the past, and this year many of them have been the victims in a number of large-scale abductions.

Another activist and protester in Kabul, Habibullah, who goes by only one name, said Wednesday’s demonstration aimed to show the unity of the Afghan people, regardless of ethnicity or sect.

“Our voice wants justice, brotherhood, sanctity of life, peace and equality,” he said. “No one can tolerate any longer the situation we have in the country.” 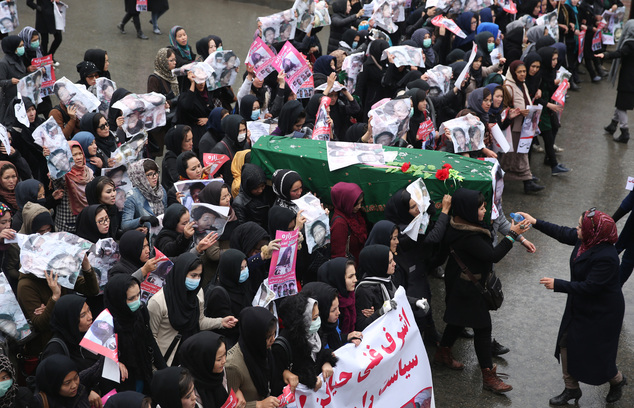 Afghan women carry the coffin of a 9 year-old girl as thousands march in the Afghan capital of Kabul on Wednesday, Nov. 11, 2015 with the coffins of seven ethnic Hazaras who were allegedly killed by the Taliban, calling for a new government that can ensure security in the country. Farsi posters carried by the protesters call for security ant call on President Ashraf Ghani to resign.(AP Photos/Massoud Hossaini) 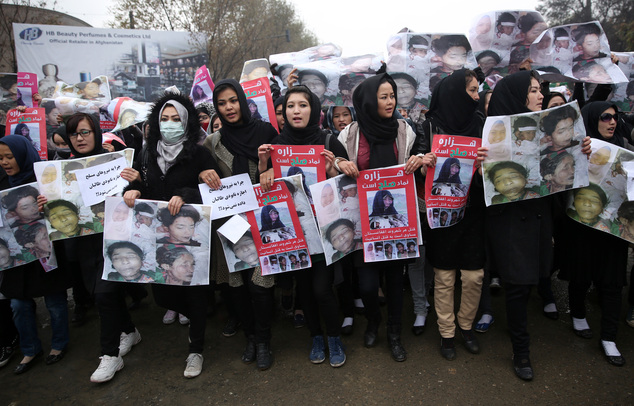 Women march in the Afghan capital of Kabul on Wednesday, Nov. 11, 2015 with pictures showing ethnic Hazaras who were allegedly killed by the Taliban, calling for a new government that can ensure security in the country. Farsi posters carried by the protesters call for security ant call on Preident Ashraf Ghani to resign.(AP Photos/Massoud Hossaini)

A Hazara tribeswoman cries in a car as thousands march through the Afghan capital of Kabul on Wednesday, Nov. 11, 2015, carrying the coffins of seven ethnic Hazaras who were allegedly killed by the Taliban and calling for a new government that can ensure security in the country. (AP Photos/Massoud Hossaini)