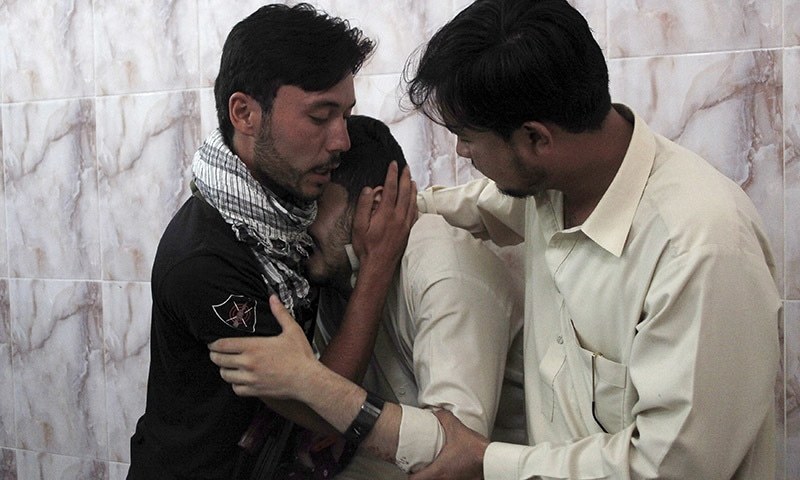 Men mourn the death of a relative, who was killed with two others by unidentified gunmen on July 6. A policemen and two others were killed when unidentified assailants opened fire on them near the passport office at Join Road in Quetta on Monday, according to the police. –Reuters.

Three people — including a policeman — were killed when unidentified assailants opened fire on them in Quetta’s Joint road area on Monday morning, police sources said.

Two others — including a woman — were also injured when assailants opened fire near the city’s passport office on Joint road.

The casualties were shifted to Civil Hospital for a postmortem examination.

“Apart from the policeman, all victims belonged to Quetta’s Hazara community,” police said, while terming the incident an act of targeted killing. The deceased policeman was identified as Kala Khan.

Two of the deceased were brothers who were entering the passport office along with their parents when the waiting gunmen opened fire. Police and Frontier Corps personnel arrived at the site of attack and initiated an investigation into the incident.

“The boys, in their twenties, were killed in the shooting while their parents were wounded and the policeman who was passing by the site was also killed after he shot and wounded one attacker,” senior police official Abdul Razzaq Cheema said.

He added that two gunmen were involved in the shooting but they had others assist to them in escaping the scene. Provincial Home Secretary Akbar Hussain Durrani confirmed the shooting and the casualties.

No group immediately came forward to claim responsibility, but several such attacks in the past have been carried out by sectarian outfit Lashkar-i-Jhangvi, which has flourished in recent years despite being outlawed.

The deceased received multiple bullets in their heads, police said. In the aftermath of the attack, shops in the area were also closed.

The incident comes a day after a blast killed one person and injured 19 others in Quetta’s Bacha Khan Chowk.

Members of Quetta’s Hazara community staged a sit-in outside the Inpector General Police (IGP) Moha­m­­mad Amlesh Khan’s office to condemn the attack on Hazaras. The protesters brought the bodies of the victims along with them to mourn the killings.

Sectarian violence — in particular by Sunni hardliners against the Shias that make up roughly 20 per cent of Pakistan’s 200 million people — has claimed thousands of lives in the country over the past decade.

Forty-three Shia Ismailis were massacred in the Karachi in May in the first attack in the country claimed by the Islamic State group. The worst atrocities, however, have struck Balochistan, home to some 200,000 Shia, according to local organisations.

The deadliest attack so far, in January 2013, saw a suicide bomber blow himself up in a small snooker hall. About ten minutes later, when rescue workers had rushed to the scene, a truck packed with explosives that had been parked near the hall was detonated. The overall toll was close to 100 dead.