You are at:Home»Refugees»Hazaras Have Nothing To Lose But Their Lives 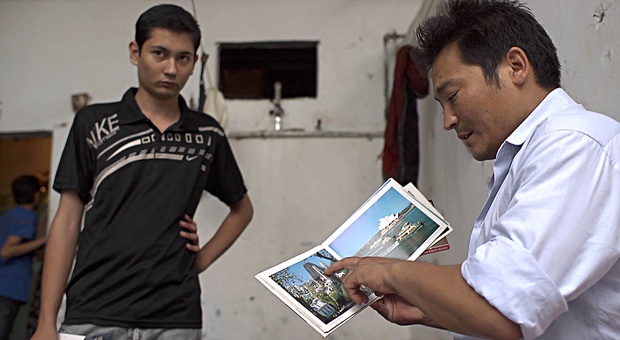 Hazaras Have Nothing To Lose But Their Lives

A young filmmaker travelled to Quetta, Pakistan, to find out why so many Hazaras are risking their lives to seek refuge in Australia. Matthew Abbott found one Hazara man, Hussain, brave enough to allow him to film his desperate, dangerous bid for asylum from the start. It is still far from over.

t an airbase in southern Afghanistan on October 28, Prime Minister Tony Abbott told Australian soldiers that he hoped the war they had been fighting had produced a country “that is better for our presence”.

Perhaps another product of that war is the asylum-seeker status of a Pakistani man in his 30s named Hussain. Hussain is currently eking out an existence at a remote caravan site in rural Australia. On a bridging visa, he is unable to make money to send home to his wife and children, who are sheltering in Quetta, Pakistan, just across the Afghan border from where the Australian PM was speaking.

Hussain is a Hazara, a member of the largely Shiite Muslim ethnic minority whose distinctive Asiatic features make them an easy target for religious persecution by Sunni extremists. Following the Allied invasion of Afghanistan, Taliban leaders regrouped in Quetta, and Taliban-linked organisations set about targeting Hazaras with car bombs and street shootings.

Hussain’s two brothers, in attempts to reach Australia, had disappeared and were presumed dead. Hussain himself had already unsuccessfully attempted the journey to Australia, but was determined to try again.

The city of Quetta is a hostile environment for journalists (at least two have been killed in bomb blasts this year, murders for which the Taliban-linked group Lashkar-e-Jhangvi claimed responsibility), which is perhaps one reason that the violence committed against Hazaras there has been under-reported, despite attacks against Hazaras in Pakistan being characterised as systematic genocide.

Photographer and filmmaker Matthew Abbott (no relation to Australia’s prime minister) travelled there in March 2012, posing as a tourist and gaining access to Hazara Town, one of two Hazara enclaves in the city.

“I wanted to come to Quetta really to find out why Hazaras were willing to make such a perilous journey,” he says, referring to the many Hazaras who entrust their lives to people smugglers in the hope of reaching Australia.

Abbott arrived in Quetta as a funeral was being held for six Hazaras who had been gunned down while travelling on the notoriously dangerous Spini Road hours earlier.

That day he met a family whose son had been recently murdered. Weeks later Abbott learned that Musa, whom he’d hired to be his taxi driver during his time in Quetta, had been shot dead in his car. Such was the climate of fear that the photographer found no one prepared to talk about their plans to flee. But later he was told about a Quetta man living in Karachi who was preparing to connect with people smugglers in Indonesia. The man, Hussain, was willing to tell his story.

Abbott met Hussain at a Pizza Hut in an upmarket area of Karachi, where he was working as assistant manager. Hazaras are also openly targeted in Karachi, as The Global Mail has reported. Hussain had a steady job, and was able to send money home to extended family in Quetta, but he and his wife and children were living in a slum, Qasba Colony, in which they felt themselves to be virtual prisoners because they were terrified to leave their neighbourhood. Hussain had to negotiate dangerous, extremist-populated areas as part of his daily commute.

Hussain’s two brothers had previously left Quetta in attempts to reach Australia, but had disappeared and were presumed dead. Hussain himself had already unsuccessfully attempted the journey to Australia, but was determined to try again.

Hussain allowed Abbott to begin filming his daily life while he made preparations to leave, granting him intimate access to the mechanics of people smuggling and to debates with friends and family over the merits of once again putting himself in the hands of the smugglers.

Once Hussain had obtained the necessary visa, Abbott followed him home to Quetta, where the would-be asylum seeker said goodbye to his wife and two young daughters, whom he left in the care of other family members, and finally set off with Abbott.

At Quetta airport, Abbott’s luck ran out. He was detained by security officials who questioned him about his activities and confiscated some of his footage.

Although separated from Hussain, Abbott later arranged to get a video camera to him so he could continue filming the journey himself. Hussain delivered: he filmed in safe houses, and people smugglers’ homes on his route through South-East Asia and, finally, his crossing of a wild stretch of ocean in a rickety boat.

Nearly a year later, Abbott received a message: it was from Hussain, who was in Australia. Reunited in Sydney, the pair headed to the Opera House; they had often talked about one day meeting there for coffee.

“I don’t know about my future here, Matt,” says Hussain in the film. “The worst pressure is Mr Tony Abbott says we won’t get the visas, the permanent visas.”

Prime Minister Abbott’s government has reintroduced punitive schemes that could see someone like Hussain re-enter detention and even be sent back home. In the meantime, Hussain has been given no indication as to when he will be permitted to look for work.

For his fellow Hazaras, who may be hoping to flee Pakistan, where the killing and kidnapping continues, or who are forced to leave Afghanistan, where they no longer have the protection of Australian troops, the future is particularly uncertain.

Prime Minister Abbott declared that he will continue to honour the war’s brave military casualties: “We mourn them, we remember them, we honour them, we want to work with their families. We will never forget.” Less clear is what he will be doing with the refugees of this same war.