You are at:Home»Afghanistan News»Role of Iran in Assassination of Baba Mazari 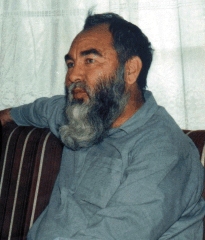 Role of Iran in Assassination of Baba Mazari Following the three-year-long battles between various Mujahideen organizations from 1371 to 1374 (Hijri Shamsi)(1992-1995), in which Iran had a significant role, the battle in the field of espionage was treading another path. Taliban’s appearance in the Afghanistan playground, backed by the UK and Pakistan, was simultaneous with Iran’s endeavors to ensure her future interests in Afghanistan. “Ittilaat & Sipah-e-Pasdaran”(Irani secret Agency & Revolutionary Guard) in co-ordination with the Foreign Ministry of Islamic Republic of Iran, set up two projects, to prop up and perpetuate war and sabotage in two sections.

Ustad Muhammad Akbari and Mustafa Kazmi, backed by “Ittilaat and Sipah” were slid towards Mr Rabbani’s government, while Iran’s Foreign Affairs Department conspired with Pakistan and Uzbakistan to lay the foundation for unity in the name of “Shoora-e-Ham Ahangi” [The consultative Committee for co-ordination], with members being Hizb-e-Wahdat-e-Islami, Hizb-e-Islami of Gulbadeen Hikmatyar, Junbish-e-Millie of General Dostum, and Jabha-e-Nijat-e-Milli under Professor Sibghatullah Mujaddadi. The objective of this project was to topple Professor Rabbani’s government and demolish Ahmed Shah Masood’s military capability.

Later on, Iran—on getting information about the onslaught of the powerful “movement” called Taliban—entered the arena to forge a deal with the UK and Pakistan for securing the interests of the Islamic Republic in the would-be government after the reign of Professor Rabbani. Iran’s measure of good intention in this deal was its offering of (the life of) Ustad Shaheed Abdul Ali Mazari, the first leader of Hizb-e-Wahdat-e-Islami, as a political gift to the UK and Pakistan. Mazari’s life would end simultaneously with the capture of Kabul by the Taliban.

Before the month of “Hoot” in 1374(1995), DX—the intelligence Organization supervised by Ahmed Shah Masood—reported as follows:

“The Taliban in Qandahar have entered into negotiations with Iranian delegations. Thus far, there have been three meetings between the high-ups in Taliban and representatives of the “Information Ministry” under the cover of Foreign Ministry officials. The Iranian Diplomat in Islamabad, in association with Moulvi Jalil—an important person having links with ISI—has attended many meetings. So much so that a group of people linked with the Communist Wing/ Faction “Khalq” that has membership within Taliban, has also travelled to Tehran. It appears that the main theme of the negotiations revolves around the determination of the fate of Ustad Mazari, the leader of Hizb-e-Wahdat-e-Islami. Reports from Tehran also state that Iranians seek to formalise an effective and identified role for Iran in Afghanistan under the would-be Taliban government.

Ahmed Shah Masud, immediately after studying the intelligence finds through DX channel, transmitted a signal of danger to Ustad Mazari’s life through his hotline. To his surprise, the danger signal bounced. The prevailing impression was that Hizb-e-Wahdat had been stupefied by the Iranian intelligence into believing that their joining hands with Taliban would ensure their interests and position within the government. In view of the complicated and shaky relationship between Mazari and the Iranian intelligence groups, Masood had concluded that Ustad Mazari had been exposed to such acute suspicions and refutations that he wasn’t able to maintain a firm enough stance for making any concrete decisions.

One of the officials in Masud’s then Special Intelligence Channel, who—assigned with the task of establishing “mutual understanding” and “arbitration” between the government and Hizb-e-Wahdat—had had many meetings with Ustad Mazari, says that Masood was aware of some of the rounds of tense meetings of Ustad Mazari’s with Iranian spies. One such meeting of Ustad Mazari’s was with Mr Murtazawee on 23rd Sunbula, 1373September 14, 1994. Yaki Yak [Code name], a “member of the council for arbitration” between the State and Hizb-e-Wahdat, describes the situation as under:

“On 23rd Sunbula, (the date of Coup d’état by Iranian Sipah and Foreign Ministry aimed at splitting the previous Hizb-e-Wahdat-e-Islami led by Mr Mazari into two), Tahir Toofan—representative of Ustad Mohammad Akbari, Sayed Ali Mazari—Incharge of Mr Mazari’s office, Mr Martazawee, the Iranian spy, and myself (Masood’s special Intelligence Agent under cover as a representative of Gulbadin Hikmatyar’s Hizb-e-Islami) were present at a Hizb-e-Wahdat location. Mr Murtazawee had brought a large photo of Ayatullah Khomeini and a small flag with him, and had placed them on a small table. Ustad Mazara, reclining against a cushion, was reticent. Mr Murtazawee, in order to start the discussion for arbitration, pointed to Khomeini’s photo and the small flag, and said:

“….With the blessings of this righteous Imam (leader), for the rise of the Shias….”

He hadn’t even finished his sentence when Mr Mazari stood up at once, took the photo and the flag from the table, threw them on a side, and said:

“Keep these words for yourselves. It is you that are behind this destruction. You are behind the calamity on both sides!”

The angry Murtazawee rose and left the meeting. His departure was, in reality, the first ultimatum to Mr Mazari and the fate of Hizb-e-Wahdat-e-Islami. From the perspective of Iranian spies, the crises on both the sides of Hizb-e-Wahdat had to be kept alive, for Iran to be able to control them and derive political mileage from both the sides. Just as Pakistan eliminated the national leadership system in South and East Afghanistan by empowering Taliban in the field, Iran has also perpetuated its pursuit of eradication of national and communal structures with a view to substituting it with the clerical system of Walayat-e-Faqeeh in the Shia society in Afghanistan.

The aggravation of Taliban offensives for the capture of Kabul, and the display of Mr Mazari’s unity with Taliban, sets the seal of approval on all the reports of the DX Channel. To capitalize from this situation, Masood embarked on a huge six-day-long, land and air offensive on Hizb-e-Wahdat-e-Islami’s positions which debilitated Hizb-e-Wahdat’s military organisation in West Kabul. As per the agreement, Iran handed over Mr Mazari to Taliban as a gift.

“The main discussion in the meeting was about the oil trade dealings in the border areas. For example, one issue under discussion was the fact that Iranians used to buy oil from Iraq illegally and would sell it to Taliban. During the discussions, the Turkmenistani Petroleum Minister suddenly turned towards the Akaal Noran’s representative, and asked: ‘How long will you perpetuate the war in Afghanistan in order to deprive Turkmenistan of the profitable oil and gas trades? First you joined Rabbani; later, you supported those against Rabbani’s government. Of course, Turkmenistan understands your real objectives. You want to perpetuate the war in Afghanistan until your projects for laying the gas pipelines from Iran to the subcontinent and other regions are accomplished.’ Ilyas added: ‘Mr Niazov has a keen interest in Afghanistan’s economic importance for Turkmenistan’.”

The DX spy hasn’t written anything in his report about any explanation by Iran’s trade representative.

As the intelligence battles had been reshuffled many times, the DX spies stationed in Tehran were eager to get closer to Mr Hussaini—Iran’s Information representative—and to know what his analyses were. The main objective was to get to the bottom of the issue of Ustad Mazari deal with Taliban. Masood’s intention was to use this as a winning card in future encounters against Iran. Up until then, Iranians had attracted a significant number of people from Junbish-e-Muqawimat in Iran towards themselves. It was turning common and acceptable for more and more people to join pro-Iran gatherings. It was in this way that the DX spy, after a little while, was able to verify—through the Iranian Intelligence Officials—the plan of the deal about Ustad Mazari with Taliban.

One meeting took place in month of Saratan, 1380 H/S)(2001) in the Grand Tehran Hotel (Hotel-e-Tehran Buzurg) in the presence of Mr Hussaini, an official of counter intelligence Department of Information Ministry. Mr Hussaini (Turkish by race), was the representative of Mr Noori, the Information Secretary in the government of Sayyad Mohammad Khatemi. On that day he (Hussaini) arrived at the Hotel in a Benz (metallic colour), Model 1988. He worked in the Joint Command, dealing with Afghanistan Affairs. In the cafeteria of Grand Tehran Hotel, Mr Wahdati, Iranian Consul for Peshawar, was also in attendance. Mr Hussaini’s comments about Ustad Mazari’s life, began in a spy-like and coded tone. It was as if he had presumed the “Afghan friend” present in the cafeteria of Grand Tehran Hotel to be a Taliban supporter, despite the fact that he didn’t consider it unusual that Afghan was residing in Mashhad consulate and Sipah was paying for the rented accommodations where the Afghan resistance fighters resided. In fact, the “Afghan friend” was connected to DX channel. In the meeting, Mr Hussaini protested with the Taliban leader that they had reneged on their agreements in Qandahar, and hadn’t fulfilled their promises despite the fact that Mr Mazari had come under their control. Shias’ share in the Taliban government for ensuring the interests of the Islamic Republic of Iran, was almost negligible. He added: “We consider Pakistan to be responsible for this”.

The Afghan friend asks cautiously: “Why did you embark on this game?”.

Why did Pakistan and Taliban renege on their promises made with Iran with respect to giving prominent roles to the Iranian (not Shia) agents? The DX official say that, on the instructions of Masood, they had, at the very outset, divulged all the information received from the Intelligence departments in Iran with regard to the deal about Mr Mazari’s life, to British, American and other International resources.