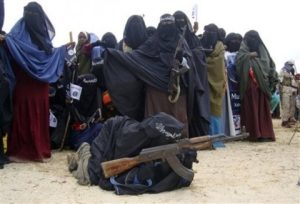 Somali women carry weapons during a demonstration in Suqa Holaha neighborhood in Mogadishu, Somalia, Monday, July 5, 2010. The demonstration was organized by the islamist Al-Shabaab group which is fighting the Somali government. The demonstrators were carrying placards written with slogans against the African Union peace keeping force. (AP Photo/Mohamed Sheikh Nor)