You are at:Home»Refugees»Australia»Rally in Sydney Against the Massacre and Target Killing of Hazara 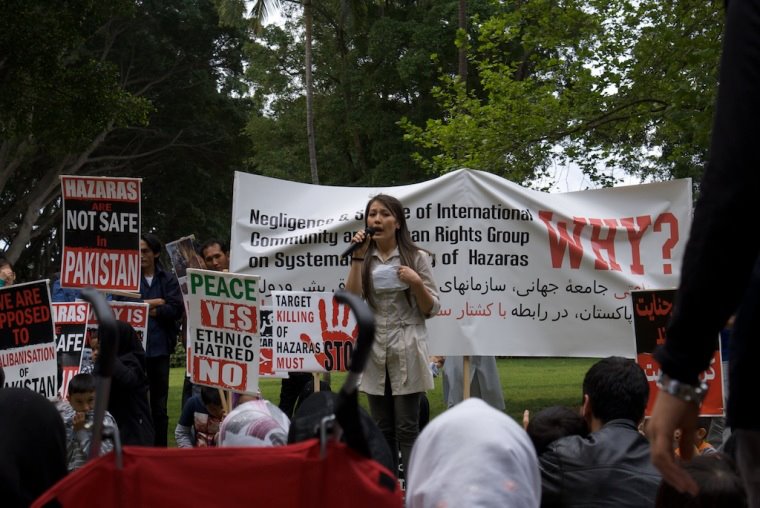 Rally in Sydney Against the Massacre and Target Killing of Hazara

Members of the Hazara Community in Sydney today, 1 October 2011, joined fellow community members the world over to rally against the systematic killing of Hazaras in and around the Pakisani city of Quetta.

Despite the dismal weather a crowd of more than a thousand people had gathered at Sydney Town Hall by around noon time. Speakers condemned the target killing of Hazaras in Quetta, Pakistan and continued discrimination against Hazaras in Afghanistan citing their place as religious and easily identifiable ethnic minority the reason they are being targeted by extremist elements.

Led my women and children holding banners at the front, protesters then marched from Town Hall, through the heart of the city along George Street then onto Liverpool street escorted by NSW police at the front and the back. They marched and chanted slogans: “Peace! Yes! Terrorism! No!” , “Say it loud, Say it clear! Refugees are welcome here!”, “What do we want!? Protection. Who do we want it for!? Hazaras”, “Down with the Taliban!” and so on. Marching on the left section of the streets, protesters were loud, proud and became the center of attention of the passers-by and Sydney-siders.

At one point in the rally, participants expressed visible agitation at a member of Hizb-ut Tahrir who was distributing leaflets against the presence of NATO forces in Afghanistan. Protesters tore his fliers as he distributed them. Visibly unwelcome and disliked, the thick-bearded middle aged man then made his way and left the rally. 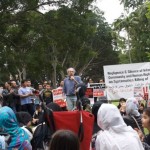 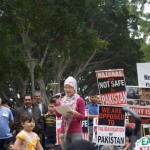 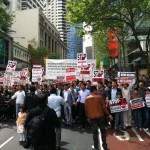 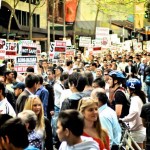 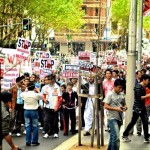 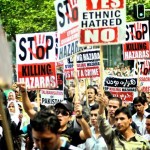 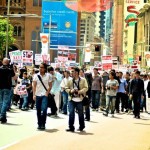 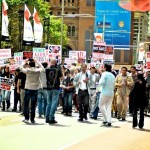 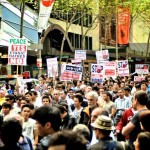 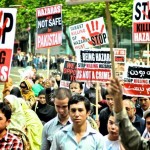 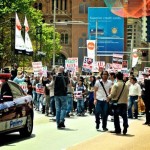 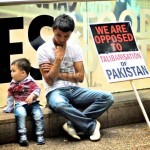 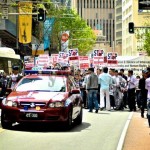 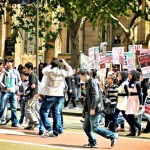 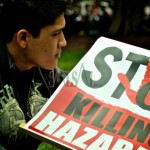 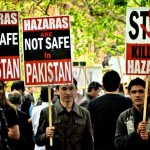 The rally then converged to Hyde Park where multiple speakers, mainly women, addressed the rally. They condemned the Pakistan authorities for either ignoring the massacre of Hazaras or being directly responsible for it. Other speakers blamed Afghan and Pakistan governments as being simply incapable of performing their roles as governments. 4 of the five speakers and the presenter of the declaration started off by references to the late 19th century genocide of Hazaras in central Afghanistan and termed the recent wave of killings in Afghanistan and Pakistan as mere continuity of the brutal tradition at the hands of state and non-state actors.

Ian Rintoul, speaking on behalf of the Refugee Action Coalition blamed the Australian government and the opposition for failing to provide protection to asylum seekers escaping persecution and in many cases certain death. He said that the indefinite detention and mental torture of asylum seekers was almost as bad as their treatment in the places they are fleeing.He placed part of the blame for the insecurity of Hazaras and other minorities on the shoulders of the “occupation forces in Afghanistan”, where as he laid it out, the invasion of Afghanistan and continuous presence of Western forces has failed to secure Afghanistan and increasingly, pushed Pakistan towards insecurity and instability.

One female speaker to the rally termed the Hazara victims of massacres and target killings in Pakistan as in the same category of victims as those of the World Trade Centre attacks in 2001, Bali Bombings of 2002 and the persecuted Christian and Ahmedi minorities in Pakistan. Another one accused the UN and human rights organizations of not doing enough on an international level to highlight the issue.