You are at:Home»Human Rights»Genocide»The forgotten genocide of Hazaras in Pakistan»Pakistani Shiite Muslims shout slogans a 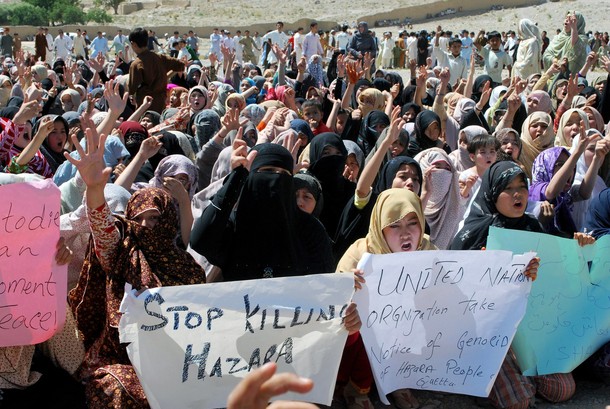 Pakistani Shiite Muslims shout slogans as they wave placards while protesting against the killing of community members in Quetta on September 21, 2011. The Pakistani government came under heavy criticism from Shiite Muslims and a leading rights watchdog after 29 people died in the worst attacks on the Shiite minority for a year. In a brutal assault, gunmen ordered Shiite pilgrims out of their bus, lined them up and assassinated 26 in a hail of gunfire in Mastung, a district 50 kilometres (30 miles) south of Quetta, the capital of Baluchistan province. AFP PHOTO / BANARAS KHAN (Photo credit should read BANARAS KHAN/AFP/Getty Images)