You are at:Home»News»Afghanistan»Odds of dying ‘worth the risk’ for a new life 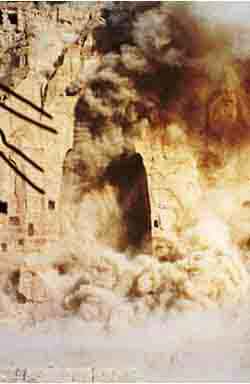 Odds of dying ‘worth the risk’ for a new life

By Admin on September 13, 2011 0 Comments
Dynamiting and destruction by Afghan/Pashtun Taliban, March 2001
Share this story Aziz Mohammadi has done the calculations on the risks he faces in making the journey to Australia to claim asylum.

The 25-year-old sociology student has watched others from his town embark on the challenge and reckons he has a 2 per cent chance of dying while attempting the trip to Australia, either by drowning at sea on a boat from Indonesia or in some mishap in Pakistan.

“But driving from here to Kabul, I face a 50 per cent chance of being killed by the Taliban on the road,” he says.

“The risk for me is to live in Afghanistan.”

Mr Mohammadi lives in the central Afghan province of Bamiyan and is a member of the ethnic Hazara minority.

Hazaras are among the biggest ethnic group taking to boats to make their way to Australia.

Almost all people in Bamiyan are Hazaras, so for most Afghans thinking of trying their luck to get to Australia, their journey begins here.

Mr Mohammadi has researched how he will get to Australia and thinks he will make his attempt in three months.

Seven out of his group of 10 friends from Bamiyan are now living in Australia after being granted refugee visas.

Although he lives in one of the most impoverished parts of the world where phone and internet access is unreliable, he follows Australian politics closely and is even aware of the High Court ruling that struck down the Government’s plan to send asylum seekers to Malaysia.

He knows about Australia’s strict detention policies and has heard stories of riots between Sri Lankan and Iranian asylum seekers in the Australian camps.

However, none of these stories has discouraged him. He has spoken by phone to friends on Christmas Island and is happy to be detained for a time if it means a new life.

“Maybe I would have to wait in the camp (on Christmas Island) for one year if that’s the only option to go to Australia,” he says.

Mr Mohammadi says he will go to Pakistan where he will get a fake ID card. A people smuggler will get him to Malaysia, then Indonesia.

Once there, he will call an agent in Pakistan who will give the people smuggler about $US5000 ($4800). He will then hand another $US5000 to a smuggler in Indonesia to put him on a boat to Christmas Island.

He will get the money by selling a small plot of land he owns and by borrowing from his brother.

“Australia is a country built by refugees,” he says. “If I get citizenship in Australia I can say proudly it is my country.”