You are at:Home»News»Beheading of Afghanistan politician seen as message from insurgents 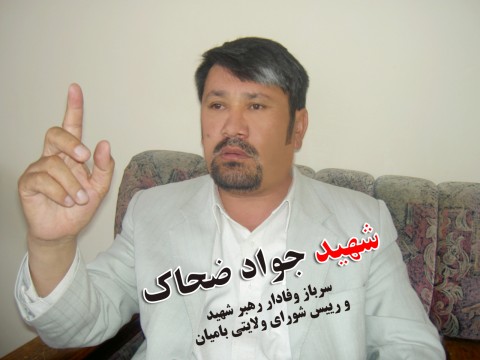 Jawad Zehak, whose decapitated remains were recovered Tuesday, was the leader of the provincial council in Bamian, a scenic haven of mountains and lakes and perhaps the most peaceful of Afghanistan's 34 provinces. (Associated Press)
News

Beheading of Afghanistan politician seen as message from insurgents

By Admin on June 8, 2011 2 Comments
Jawad Zehak, whose decapitated remains were recovered Tuesday, was the leader of the provincial council in Bamian, a scenic haven of mountains and lakes and perhaps the most peaceful of Afghanistan's 34 provinces. (Associated Press)
Share this story

The beheaded remains are those of an official in Bamian, perhaps the most peaceful of Afghanistan’s 34 provinces. The intelligence service condemns the slaying as part of a campaign to try to show that Afghan security forces don’t have the capability to take over in areas slated for security transition.

Jawad Zehak, whose decapitated remains were recovered Tuesday, was the leader of the provincial council in Bamian, a scenic haven of mountains and lakes and perhaps the most peaceful of Afghanistan's 34 provinces. (Associated Press)

Reporting from Kabul, Afghanistan— The message could hardly have been clearer, or more brutally delivered: the beheaded corpse of a respected provincial politician, dumped by the roadside.

Jawad Zehak, whose decapitated remains were recovered Tuesday, was the leader of the provincial council in Bamian, perhaps the most peaceful of Afghanistan’s 34 provinces. It is one of seven areas across the country where the Afghan police and army are supposed to begin taking over security responsibility next month.

Afghanistan’s main intelligence service, the National Directorate of Security, swiftly blamed insurgents for Zehak’s abduction and killing, and declared it part of a deliberate pattern of intimidation in the areas slated for security transition.

“The enemies of the people of Afghanistan … are trying to convince people that the Afghan security forces don’t have the capability to take over these areas,” NDS spokesman Lutfullah Mashal said during a news conference. “But we believe we can take that responsibility.”

The transfer of security to Afghan police and soldiers, to be completed by 2014, is a key element of the Western exit strategy, and its initial stages will coincide with the start of a drawdown of U.S. forces. President Obama is expected to soon announce the scope of the pullback, which is to begin in July.

Senior NATO officials have said the security transition plan remains on track despite attempts by the Taliban and other groups to sow fear and chaos in the designated areas. Those include the western city of Herat, where Taliban assailants last month staged simultaneous attacks on a bustling market area and a Western-run military base, killing four townspeople and injuring several Italian soldiers.

Bamian, a scenic haven of lakes and mountains, is best known as the site of the giant Buddha statues that were blown up by the Taliban more than a decade ago. For years, the province has been almost entirely free of insurgent activity, and also of ancillary criminal enterprises such as drug cultivation and trafficking, making it one of the safest parts of the country.

Associates said Zehak, the slain provincial council leader, disappeared late last week, apparently abducted after he left Kabul to return to Bamian by road. His body was found in neighboring Parwan province, a short distance away from the main road.

Zehak was widely known and well-regarded in Bamian, and his grisly death generated a wave of grief and anxiety. The provincial police chief, Joma Yardam, called the attack “cowardly.”

The upcoming American troop drawdown, together with the death last month of Osama bin Laden, have also lent new urgency to efforts by the West and the government of Afghan President Hamid Karzai to draw the Taliban movement into

On Tuesday, a senior U.N. representative visiting the Afghan capital said some Taliban figures might soon be removed from the world body’s blacklist. Peter Wittig, who heads the U.N.’s sanctions panel, also said a blacklist now containing the names of Al Qaeda and Taliban figures might be divided between the two groups — a symbolic step meant to underscore the view that peace with the Taliban is possible.

Witting said at a news conference that he expected “a number of delistings” by mid-June.

The Taliban movement has made the removal of key figures from the blacklist a precondition for talks. Western and Afghan officials in turn want the Taliban to renounce ties with Al Qaeda, in addition to pledging to swear off violence and respect provisions of the Afghan Constitutio.