You are at:Home»Refugees»Grieving family fight for release of body 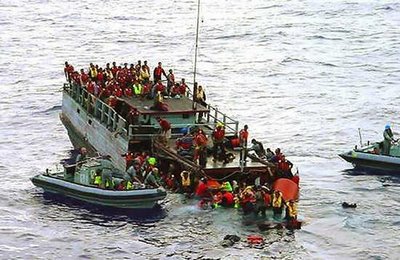 THE family of a young Afghan asylum-seeker who apparently committed suicide at the Scherger detention centre in far north Queensland is fighting Australian authorities over the repatriation of his remains.

Nearly one month after the death of Meqdad Hussain, a 20-year-old Hazara man, his family is deeply distressed it has not been able to bury him.

Australian Hazara Council spokesman Hassan Ghulam, who is acting on behalf of Hussain’s family who live in the Pakistani city of Quetta, told The Australian the stress of the situation was taking its toll on the man’s mother, Gul Andam.

“She is in and out of hospital all the time,” Mr Ghulam said.

Queensland police and the Queensland Coroner are investigating Hussain’s death, which occurred on March 17 at the converted RAAF base near Weipa, 2400km north of Brisbane.

A spokesman for Deputy State Coroner Christine Clements said the man’s identity would have to be confirmed before she could release his body.

“The Australian Federal Police liaison network is currently working with Pakistan authorities to obtain information, including a DNA sample, from the family to assist in confirming his identity,” she said.

An AFP spokesman said it was working with its partner agencies on the matter. “This process can be complex as a number of legal and logistical requirements need to be met,” he said.

Australian authorities had made contact with his family and know where they live, Mr Ghulam said, but agents had not yet visited Hussain’s family. Both Mr Ghulam and the Asylum Seeker Resource Centre’s Pamela Curr suggested that Pakistani authorities might be blocking the return of Hussain’s body.

There is growing concern from refugee advocates and human rights groups about the crowded conditions inside mainland detention centres, particularly Scherger, as authorities move to shift detainees from Christmas Island.