You are at:Home»Refugees»Pakistan and the rest of Asia Pacific»Hazara Democratic Party concerned over Karachi killings 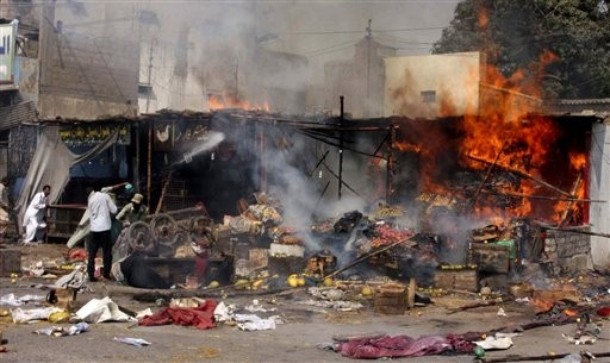 grief and sorrow over the killing of innocent people.

It seems as if under a planned conspiracy people were being massacred while law enforcement agencies were observing complete silence over the security to life and property of masses. A Spokesman of the party here Wednesday said that Karachi is a source of livelihood for the people of whole country and people from different walks of life come to this city in search of employment. Several of them have lost their lives owing to law and order situation or become victim of unemployment.

Expressing concern over unserious attitude of Sindh Government, Spokesman said that no party included in the government was seriously analyzing the situation. It seems as if some forces wanted to take steps against the government by making situation tense in Karachi and parties include dint he Sindh government were paving way for it.

Spokesman said if political forces in Karachi and Sindh did not take serious view of the situation and play their role to improve la and order situation, entire country would have to face the result.

Three brothers affiliated with the MQM were killed near Chatai Ground, the Malir City police said. Qamar Abdul Rasheed, Rameez Abdul Rasheed and Imran Abdul Rasheed were sitting outside their house when unidentified men opened fire on them. They sustained serious injuries and were taken to the Jinnah Postgraduate Medical Centre (JPMC). However, Qamar and Rameez died on their way to the hospital.

An unidentified man’s tortured and bullet-riddled body was recovered from a gunny bag on the Shah Waliullah Road, the Kalri police said. The body was found in a garbage drum at Niazi Chowk with two bullet wounds. It was shifted to the Civil Hospital Karachi (CHK).

Two men were killed and three injured when over five unidentified men opened fire on a minibus of route No C-17 at the Khyber Chowk, the Peerabad police said. One of the deceased men was identified as Imran Siddique, 28, and his body was shifted to the Abbasi Shaheed Hospital (ASH), while the unidentified man appeared to be around 30 years old and his body was shifted to the CHK. Nadeem, 24, Feroz, 12, and Farooq, 19, sustained injuries and were taken to the Qatar Hospital. Unconfirmed reports suggested that Nadeem was an MQM supporter.

A motorcyclist was killed near Hazara Morr Chowk, the Peerabad police said. Unidentified men opened fire on Afroz Iqbal, 28, a resident of Sector 11-E in North Karachi’s Muslim Town. His body was shifted to the ASH.

A rickshaw driver was killed near Hussainabad, the Azizabad police said. The victim was identified as Qeemat Khan, a resident of D’Silva Town in North Nazimabad.

Two young men were killed at the Timber Market, the Eidgah police said. The victims appeared to be Urdu-speaking.

A man was killed in Malir’s Kala Board, the Saudabad police said. Ahsan Asghar Hussain, 30, was found without a mobile phone, suggesting he was killed in a mobile snatching attempt. However, the victim’s heirs claimed that Hussain was killed because he belonged to the Shia sect.

A man was killed in Orangi Town’s Altaf Nagar, the Manghopir police said. The body of Shamim Altaf, 30, was taken to the Qatar Hospital and then moved to the CHK.

An unidentified man was killed in Gulshan-e-Sikandarabad, the Jackson police said. His body was taken to the CHK and later shifted to the Edhi morgue.

A man’s tortured body was recovered from a graveyard in Ghazi Town, the Malir City police said. He had sustained two bullet wounds and was found with his hands bound. His body was taken to the JPMC and later shifted to the Edhi morgue. The victim appears to be of Baloch origin.

A young man was killed near Bakra Hotel, the Kharadar police said. The victim was identified as Syed Shiraz Qamaruddin, a resident of the same area. His body was shifted to the CHK.

Two brothers were killed when unidentified motorcyclists opened fire at the Quetta Darbar hotel in the Babar Market, the Landhi police said. Asmat Khan and Shah Muhammad were killed on the spot. The victims were shifted to the JPMC.

A man was killed and another injured when unidentified motorcyclists opened fire at the Siddique carpet shop in the Babar Market, the Landhi police said. Niaz Khan was killed on the spot, while Saeed sustained injuries. The deceased and the injured were shifted to the JPMC.

A handicapped man was killed in Mansehra Colony, the Sharafi Goth police said. Syed Badshah, 40, was fired at by unidentified motorcyclists. His body was shifted to the JPMC.

A man was killed near the Meteorological Department office, the Mobina Town police said. The body of Hanif Khan, 35, was shifted to the JPMC.

A man was killed by unidentified men at Qasba Morr in Awan-e-Ittehad Colony, the Peerabad police said. The body of Sher Khan was shifted to the CHK.

Enraged heirs of the victims protested at the JPMC and damaged the medical centre’s property.

Capital City Police Officer (CCPO) Fayyaz Laghari said investigators were trying to determine whether the incidents were target killings or if the victims were killed over personal enmity. “Around 20 people were detained from different areas, including Orangi Town, Baldia Town and Kati Pahari, for their involvement in riots and incidents of violence.” However, sources said more than 15 of the detainees were bystanders.