You are at:Home»Refugees»‘What now for refugee rights?’ 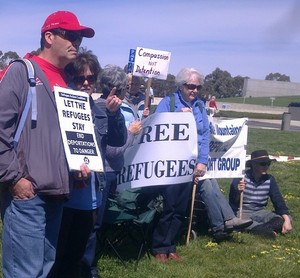 ‘What now for refugee rights?’ “After the election: What now for refugee rights?” was the theme of a September 29 Refugee Action Collective forum.

Wesley Widlend, from National Labor Students, condemned federal Labor’s “disgraceful display” on asylum seeker policy. “Many members of the Labor Party consider the party policies inhumane”, he said. An immediate aim of the refugee rights movement should be “community processing of asylum seekers”.

The Greens’ Elissa Jenkins said it was “time for the Greens to listen to people’s ideas” on the goals of the refugee rights movement and for a “real campaign plan”.

Afghan Hazara community member Hassan Ghulam said the “persecution of the Hazara minority in Afghanistan goes back many generations”. He appealed to the new Australian government: “Please don’t send asylum seekers back to Afghanistan.”

Ghulam pointed out that at least 17 of the people sent back to Afghanistan from the Nauru detention centre under the former Coalition government in 2006 were later killed.