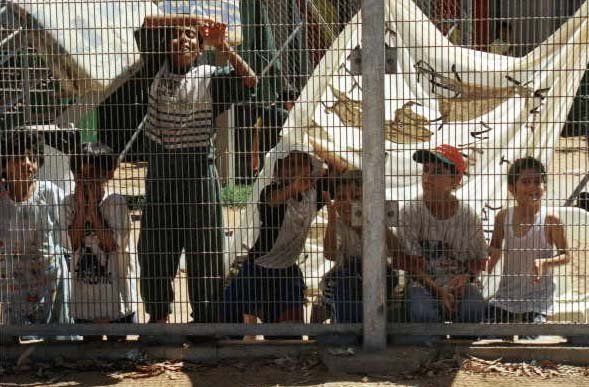 About 150 protesters and three politicians unhappy with the treatment of asylum seekers have gathered in Canberra on the first sitting day of the new parliament to demand the federal government take action.

As the formalities of opening Australia’s 43rd parliament took place inside Parliament House, members of the Australian Greens and Independent Andrew Wilkie joined demonstrators on the building’s front lawns to call for an end to mandatory detention.

“… for no real gain other than to make themselves feel tougher, more secure and in some ridiculous race to put politics before the lives of people,” she said.

“It’s time to change that. We have a new parliament.”

Senator Hanson-Young said more than 700 children were in immigration detention at the moment, including a 16-year-old boy she met in Darwin who had escaped to Australia after his whistleblower father was killed in Afghanistan.

“He’s attempted suicide four times … this is what our current system is doing to people,” she said.

“It is time that we heed the warning signs, it’s time that we come up with a better system because the current system is failing the exact same people it is meant to protect.”

“There is supposedly so much wrong in Afghanistan that we need to send our troops there, but so little wrong that we can suspend refugees who are coming here fleeing that?” he said.

“That suspension must be lifted and we need to move towards a more practical, long-term, humane and compassionate approach.”

Mr Wilkie said the government and opposition needed to stop talking about “hard” and “soft” asylum seeker policies and start honouring the spirit of the UN Refugee Convention.

“So for a start, no offshore processing, no excision of offshore islands and pretending they don’t belong to Australia, no mandatory detention,” he said.

“This is not a border security issue, this is fundamentally a humanitarian issue.”

Mr Wilkie called on Ms Gillard to “show some backbone” so Australia would be known around the world as a country where legitimate refugees could find safe haven from persecution.