You are at:Home»News»U.S. Probes Karzai’s Kin 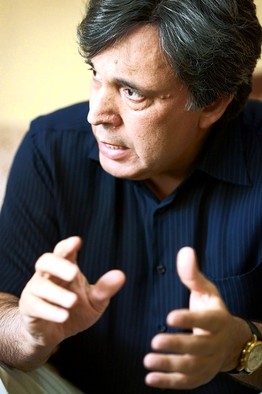 Mahmood Karzai, whom U.S. prosecutors in New York are investigating, helped develop the Aynomina housing community on the edge of the city of Kandahar./ Joel van Houdt for The Wall Street Journal
News

By Admin on September 27, 2010 0 Comments
Mahmood Karzai, whom U.S. prosecutors in New York are investigating, helped develop the Aynomina housing community on the edge of the city of Kandahar./ Joel van Houdt for The Wall Street Journal
Share this story Mahmood Karzai, whom U.S. prosecutors in New York are investigating, helped develop the Aynomina housing community on the edge of the city of Kandahar./ Joel van Houdt for The Wall Street Journal

By MATTHEW ROSENBERG, DEVLIN BARRETT And ADAM ENTOUS
Federal prosecutors in New York have opened a criminal probe of one of Afghan President Hamid Karzai’s brothers, raising the stakes in Washington’s sometimes-contentious dealings with the Karzai government.

U.S. officials said Mahmood Karzai has become a focus in a corruption probe handled by federal prosecutors in the Southern District of New York, an office that has a history of charging, extraditing and trying suspects in far-flung parts of the world, including Afghanistan.

Any move to indict Mahmood Karzai, who is a U.S. citizen, carries huge risks for American officials, whose anticorruption efforts have often provoked sharp backlashes from President Karzai.

Prosecutors are trying to determine whether they have enough evidence to bring charges of tax evasion, racketeering or extortion, said U.S. officials.

In an interview, Mahmood Karzai denied any wrongdoing. His business interests and wealth were acquired legitimately and his sole interest is “rebuilding Afghanistan,” he said.

If U.S. prosecutors decide to bring charges against Mr. Karzai, they are unlikely to move until early next year, after a review of Afghan strategy by the Obama administration, officials say. The decision about whether to proceed with a U.S.-based prosecution rests with the Justice Department.

A spokeswoman for the federal prosecutor’s office in New York declined to comment. The U.S. embassy in Kabul said it couldn’t comment on “ongoing legal matters.”

A spokesman for President Karzai couldn’t immediately be reached; in the past, he has said he comments only on matters concerning the president, not family members.

Mahmood Karzai, who is the president’s eldest brother, currently owns four properties in the U.S. and splits his time between his home in suburban Baltimore and rented houses in Dubai and Kabul.

He has amassed a net worth of roughly $12 million, according to financial documents he provided The Wall Street Journal. Before 2001, his main business was a restaurant in Cambridge, Mass.

Among other interests, he owns 20% of a sprawling American-style housing development in the desert on the outskirts of Kandahar.

Mahmood Karzai’s status as a U.S. citizen would make him easier to prosecute than other Afghans, should prosecutors go forward. He is subject to U.S. tax law, and some of the transactions any prosecution might focus on could involve U.S. government loans, which he sometimes has used to build his businesses.

U.S. officials haven’t alleged any criminal misbehavior on Mahmood Karzai’s part. Their interest in him has been rising lately following nearly 18 months of anticorruption inquiries by U.S. and Afghan investigators.

Officials wouldn’t say where they think Mahmood Karzai might fit into a web of illicit business dealings, involving various Afghans, that U.S. officials say they have mapped through thousands of hours of wiretaps, information from informants and tens of thousands of pages of documents seized in raids on Afghan businesses.

He isn’t the only person who has come to prosecutors’ attention, officials say. Others include Afghan bank executives and alleged opium traffickers.

The investigation brings into sharp relief a central tension U.S. officials face: how to balance their relationship with President Karzai’s government against what they say is the need to combat deep-rooted corruption undermining that administration.

U.S. officials say corruption, insider dealing and nepotism have made the Karzai administration weak and unpopular, helping fuel the Taliban insurgency. For the U.S., turning a blind eye to this risks undercutting a strategy built around the idea of restoring the Afghan government’s credibility.

Yet a full-bore crackdown on allegedly corrupt officials and their relatives is no longer considered a realistic option for the U.S.

The arrest of one of President Karzai’s aides this summer by U.S.-backed Afghan anti-corruption investigators provoked a feud between Washington and the Afghan leader, who has since worked to undercut the independence of special Afghan investigative units built over the past year under U.S. and European tutelage.

U.S. officials in recent weeks have begun shifting toward a less public fight against high-level corruption. They say the new plan is to quietly pressure President Karzai to clean up his administration rather than forcing public confrontations.

Mahmood Karzai helped raise millions to aid his brother’s re-election last year. In recent interviews he said he wants to start his own political party, maybe even run for president himself when his brother’s term ends in 2014.

His platform would be promoting free enterprise, he said over the summer. “I am going to free these people”—the Afghans—”from the world of ideologies, and government control and religion. I’m talking about the free market and free people.”

Mahmood Karzai’s years in the U.S. gave him access to people like Jack Kemp, the late Republican congressman and vice presidential candidate, who Mr. Karzai said helped him obtain $5.5 million in U.S. government loans to finance a pair of housing developments.

Mr. Kemp “knew I wanted to build Afghanistan. He supported what we are trying to do here,” Mr. Karzai said in an interview earlier this summer. He said the loans have been repaid.

Mahmood Karzai was also among a group of businessmen through whom the U.S. Agency for International Development provided several million dollars to set up the Afghan Chamber of Commerce.

The housing development outside Kandahar in which Mr. Karzai has a one-fifth interest was started in part with a $3.5 million loan from U.S. Overseas Private Investment Corp., which Mr. Karzai said has been repaid.

Called Aynomina, meaning “a place to live,” it aims to offer a slice of suburbia near the southern city where the Taliban rose to power. Houses sell for between $20,000 and $400,000. The streets are lined by imported eucalyptus trees. There are towering water fountains, small shopping strips and restaurants.

It was dogged by controversy from its start in 2004. Mahmood Karzai’s group got the 10,000-acre property virtually free from Kandahar city officials, who turned it over although it was technically owned by the Afghan military. The military still claims the land.

Mr. Karzai said the project will bring the city millions in payments from the developers and tenants. “If we didn’t have this contract, this land will be taken by people with guns,” he said.

—Siobhan Gorman and Julian E. Barnes contributed to this article.
Write to Matthew Rosenberg at matthew.rosenberg@wsj.com and Devlin Barrett at devlin.barrett@wsj.com
Source