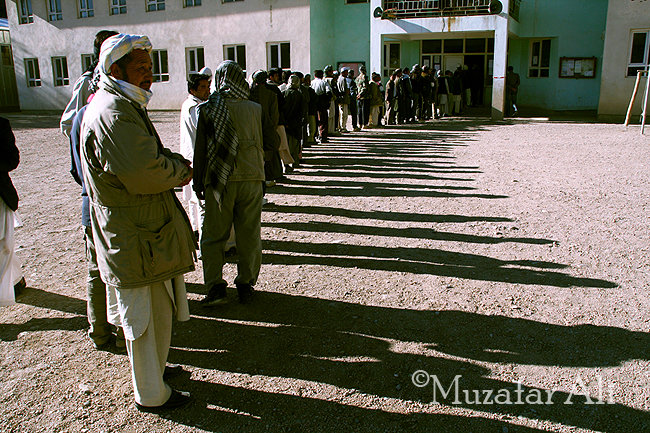 Liaquat Ali Hazara, September 26, 2010: The Parliamentary Election of 18th September, 2010 in Afghanistan was thought to be a harbinger of positive socio-political change in Afghanistan’s multi-ethnic scenario as various concerned quarters, NGOs, CBOs, international donors and aid agencies were gleefully making huge preparations to mobilize the masses to vote amid repetitive life threats and decrees issued by the Taliban to restrict people from taking part. The war-torn country has seen almost two decades of civil war, fierce ethnic fighting, displacement and forced migration to the neighbouring countries which left a large population of Afghan nationals to be brought up and groomed in foreign soils. Since the collapse of the Taliban regime in October, 2001, the Afghan citizens happily returned to their native land as they hoped to rebuild their country under shadow of International Community and witness their children making contribution in its progress but the deteriorating law and order situation has badly disappointed them.

In post Taliban era of Afghanistan, resuming the political process and bringing awareness among people about their fundamental rights was never easy as the basic infrastructure of the country had been severely demolished in a series of ethnic clashes although the Afghan youths thronged into public and private sector organisations to strengthen these institutions. They also, keenly, participated in educational institutions, learning new skills, familiarizing themselves with ICT to build up the country anew. The International Community poured billions of dollars to build up its infrastructure and root out the menace of the Taliban-style perception of Islam and social values from their society. Afghanistan’s powerful warlords and chieftains have always overshadowed the progress and prosperity of the country providing the course of action was against their will. General public is well aware of the influence and might of these figures as indulging in war crimes and human rights violation are toy’s play for them.

Given the fact that Hamid Karzai-the incumbent President of Afghanistan-was unwillingly supported by America and its allies in last year’s presidential election to be elected for a period of four years to control the reign of Afghan Government, it was understood that he would do everything to please the sympathizers of the Taliban to start negotiation with them. Hamid Karzai and his half brother Ahmed Wali Karzai have been accused of accumulating huge wealth in form of mega corruption from government projects, tenders, recruitments of high ranked bureaucrats and to poppy cultivation. The incumbent Afghan President is also termed as Mayor of Kabul rather than the Head of country due to the fact that the law and order situation in overall Afghanistan is deteriorating. The public and private sector organizations heavily depend on foreign aid and the Taliban have stretched their influence to many of its provinces where they have formed a shadow government. They, even, collect tax from the locals, passer-bys and transports to finance their terrorist activities in the country. There are reliable reports that the Taliban are openly promoting their terrorist campaigns in places like Nahoor District (Ghazni Province) where they are seen patrolling the areas, inviting the locals to join them for the want of money and, due to unemployment and abject poverty, hundreds of people have already wished to work for the Taliban.

Hamid Karzai, on the other hand, has opened many fronts including direct racial discrimination of other ethnicities such as the Hazaras. In a series of Human Rights violations, he allowed the Taliban in disguise of the Pashtun Nomads to ransack, plunder, torch and murder innocent ethnic Hazaras in Behsud and Diamirdad areas of Afghanistan in June this year. As a result of their unlawful infiltration into these areas, houses, shops and crops were looted and burned, people were murdered and forced to leave their native places which agitated the Hazaras living across the world to stage demonstrations and protests against these atrocities and cruelties. Hamid Karzai and his government were unmoved by these human rights violation which convinced the locals that he, himself, may have backed the Pashtun Nomads to persecute the native inhabitants of the land. The Afghan troops deployed in these areas, had been withdrawn to pave the way for pre-planned infiltration and looting of Hazaras’ land. Ironically, The NATO, ISAF and international community turned a deaf ear to the whole matter which infuriated the affectees and the human rights activists to condemn their duality.

Hamid Karzai – an ethnic Pashtun of Popalzai tribe – would wish to gain support of Afghan warlords, chieftains and notables, hence, his cunningness and ill-motives against other ethnicities especially the Hazaras could be easily analysed through his malicious intents to suppress and usurp their rights. He exemplified his horrific deeds when the Taliban cum Pashtun Nomads tried to invade native places of Hazaras in West Kabul on 13th August, 2010. Many innocent people lost their life due to indiscriminate firing of the Taliban Nomads and Afghan troops who aimed to target ethnic Hazaras, protesting against these cruelties. Reportedly, the Taliban Nomads had been provoked by a Pashtun MP to drive Hazaras out of their places in a bid to gain control of the area.

Hamid Karzai also solidified his true nature as a Pashtun racist when he, for the second time, rejected the nomination papers of 5 Hazara candidates to be included into the cabinet. Among other things as well as this discriminatory attitude of the Afghan President forced Haji Mohamamd Mohaqiq, the Chairman, People’s Islamic Unity Party of Afghanistan to withdraw his support from Karzai and his incumbent government. The Pashtun, boastful of their strength and population in Afghanistan, have always discriminated against the ethnic Hazaras. No matter how liberal they try to prove in terms of practicing and understanding Islamic values and Afghan culture, they have always been supportive of extremist views and its promulgation into the region.

The recent Parliamentary Election of 18th September, 2010 witnessed an uneven discriminatory attitude of the Pashtun leaders. The Afghan President and the Head of Afghan Election Commission, Mullah Manuwi flouted their constitution and moral duties with impunity. Areas of Central Afghanistan known as Hazarajat were, preponderantly, deprived of their constitutional rights to vote as ballot papers finished as early as 11:00 AM whereas the Pashtun and Tajik dominated areas were dispatched thousands of ballet papers in excess to legitimatise their win fraudulently. Thousands of ethnic Hazaras had eagerly queued early morning to cast their votes to their favourite candidates but due to dire shortage of ballot papers and election ink they were told to go home. Places like Jaghori, Malistan and Nahur ran out of ballot papers and indelible ink in the first couple of hours of morning which agitated the locals to march to the heart of the city for mass protest and demonstration.

An eyewitness, Mr.Mukhtar Pedram, the Managing Director Weekly “Hashd-dad”, who visited Jaghori District says, “There were a large number of people in the election but, unfortunately, tens of areas faced shortage of ballet papers which prevented thousands of people to vote.” He says, “Only in Jaghori District, 14,000 people could not cast vote to their favourite candidates due to its unavailability. In Malistan District, for example, three polling centers were shut down because of lack of ballet papers and about 4,000 people, mostly belonging to ethnic Hazara of Meknik area could not vote. On the other hand, the Head of the Afghan Election Commission, Mullah Manuwi had omitted 80 polling centers in these regions despite complete security.

Surprisingly, no election was held in Qarabagh despite full preparations although the voters had made long queues outside polling stations since early morning. Initially, the officials of election commission and Afghan government assured the voters of the start of election but, after a few hours of desperate wait, they were informed that the election had been called off due to security reasons. The voters were astonished to know that the pretexts of Afghan election commission and the corrupt Afghan government were usurping their right to vote as though Qarabagh is a peaceful region, occupied by ethnic Hazaras who know no security threats.

There are reliable reports that polling ended in noon in places like Dasht-e-Barchi which is mainly inhabited by the Hazaras.

International Community, Human Rights Organizations and International media have kept complete mum over high-handedness of Afghan government and its election commission. It is worth mentioning that the Grievance Commission set up by Hamid Karzai to redress complaints and grievances regarding irregularities and fraud in general elections, comprise of the Pashtun and Tajik whereas the representation of ethnic Hazaras have been completed ignored.

The corrupt Afghan government, the bigoted Afghan President and the Head of Afghan Election Commission, Manuwi should be held accountable for all the fraud and rigging perpetrated in the recent parliamentary election. The Head of election commission has been biased in conducting free and fair election who should be taken to task and removed of his post immediately. The parliamentary election should be called off as the suffrage of one particular ethnicity has been undermined to marginalize the representation into the next parliament. It is high time that an Independent Enquiry Commission, comprising of foreign delegates be formed to thoroughly probe the matter and those found involved in perpetrating election fraud should be penalized as per the law.