You are at:Home»Refugees»Australia»Behind the refugee break-out 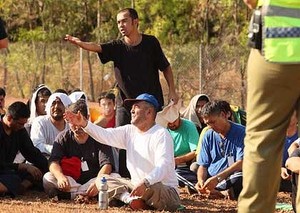 Hazara refugee broke out of their detention centre on September 1 to hold a peaceful seven-hour protest. Photo from RAC Victoria.
Australia

Behind the refugee break-out

By Admin on September 12, 2010 0 Comments
Hazara refugee broke out of their detention centre on September 1 to hold a peaceful seven-hour protest. Photo from RAC Victoria.
Share this story Hazara refugee broke out of their detention centre on September 1 to hold a peaceful seven-hour protest. Photo from RAC Victoria.

Hazara asylum seekers, who broke out of the Northern Immigration Detention Centre in Darwin on September 1 to hold a peaceful seven-hour protest, have been transferred to the WA Curtin detention centre.

On September 3, Australian Association of Hazaras spokesperson Arif Fayazi told ABC radio he was concerned for their welfare.

Fayazi said that when he was in detention in similar circumstances in 2000, many of his fellow detainees became so distressed they harmed themselves.

The NT Times reported on September 1 that asylum seekers had said they had asked “ten times or more to speak to the media” but had been refused.

This refusal to be heard appears to have sparked their protest.

Several people, including refugee advocate Pamela Curr, saw an asylum seeker throwing a bottle with paper inside it to reporters.

The September 1 Australian published the torn up note. It had pieces missing, but it contained the plea “I escaped… 2000 to Australia for protection but was deported back … now I have risked my life again in search of protection … my race and religion …”.

On September 1, Department of Immigration and Citizenship (DIAC) spokesperson Sandi Logan told Lateline many of the detainees involved in the protest had been on a “pathway where they have been told that their application for visa protection had been unsuccessful”.

He also told Sydney’s Daily Telegraph the same day that he was not aware that officials had told the detainees that Afghanistan was safe. He said officials might have been reacting to “the government’s refrain”.

Curr told Green Left Weekly that DIAC officials admitted they told the men that those rejected at the Internal Merits Review would be sent back to Afghanistan. She said this contradicts an agreement that DIAC would hold off on removals until the High Court case on the matter reached a decision.

She also said the asylum seekers felt they had been lied to by DIAC. They were told when they were transferred to Darwin from Christmas Island four months ago that they were on a “positive pathway”.

The Telegraph said Hussein Ali alleged immigration officials had told some of them the day before that they had to return home. They were fearful they would be killed. “If Afghanistan is safe, what are Australian soldiers doing there?” he said.

On September 3, the Hazara protestors were taken to the remote Curtin detention centre. A DIAC media release said it was because the recent protest by Indonesian detainees had reduced accommodation at the Darwin centre.

Curr had told GLW this was clearly a lie, as the Indonesian fishermen were housed in a separate area.

The September 1 NT Times reported that Logan said at the protest that the situation inside the centre was “quiet”, and “business as usual”. “The Indonesian crewmen are all in their compounds”.

However, a September 7 DIAC media release claimed it had “informed detainees on August 31 that damage to accommodation blocks caused by earlier protests had rendered them unfit for occupation … such that some of the detainees would be transferred to the Curtin Immigration Detention Centre”.

DIAC said the detainees “were briefed in groups on August 23, 24 and 25 on the processes associated with their protection visa application, and how the independent merits review system operated”.

DIAC told the ABC on September 3 that Serco, the private firm running the centre, would investigate the circumstances surrounding the protest. It said the reports would not be released to the public but the department would be open about the findings and recommendations.

Having Serco, the company responsible for the physical detainment of asylum seekers, investigate the circumstances surrounding the protest avoids the question of what caused the protest in the first place.

The protest also raises the rights of refugees to talk to the press.

GLW asked DIAC if it could talk to some of the protesters. A DIAC spokesperson said it was not possible because DIAC has a “duty of care as it can affect their claims and harm their family back in their home country”.

The protesters were desperate to talk to the Australian people. One of them told the NT Times “we don’t have anything to lose”.