You are at:Home»Refugees»Pakistan and the rest of Asia Pacific»Tension abounds in Pakistani city as Shiites bury bombing victims 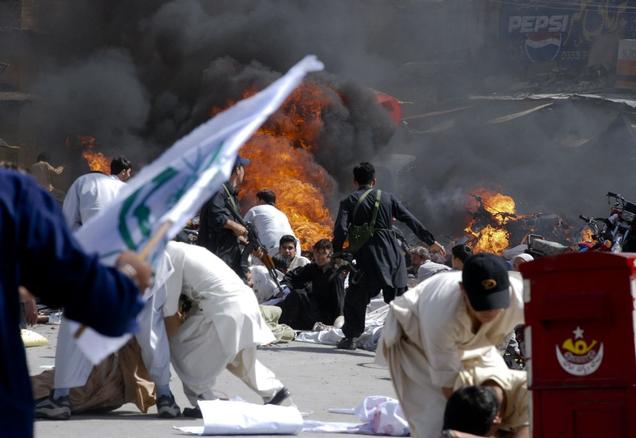 victims of a suicide bombing that killed 60 people.

More than 168 people were also injured Friday in the capital of Baluchistan province when a suicide bomber attacked a rally in which thousands of Shiites were participating.

Police were on high alert Saturday while businesses and educational institutions were closed and vehicles stayed off the roads after a call for three days of mourning by Shiites.

Most of the victims belonged to the Hazara minority, who profess the Shiite faith. Forty-five bodies were taken to their graveyard for burial. Relatives sobbed and wailed as the coffins were lowered into the graves.

A senior police officer, Khurrum Shakoor, said by telephone that the death toll in the attack has risen to 60 overnight after some of the critically injured had died.

Media reports said about 15 kilograms of explosive material was used in the attack and police were investigating how a bomber wearing such a large explosives vest could have breached security cordons.

The English-language Dawn newspaper reported Saturday that two militant groups had claimed responsibility for the attack.

Lashkar-e-Jhangvi, an extremist anti-Shiite group, said Arshad Muavia, 22, carried out the attack, but according to reports from tribal areas near the Afghan border, a Taliban spokesman claimed responsibility, the paper said.

The latest television footage showed a suicide bomber slowly walking into the middle of the crowd at the rally for al-Quds (Jerusalem) Day, celebrated to express solidarity with the Palestinian people and against the Israeli occupation of Jerusalem. The bomber then detonated his explosives. A huge column of fire and smoke could be seen rising from the site as people fled.

Interior Minister Rehman Malik called on religious leaders to cancel all long processions because of the deteriorating security situation in the country, whose government is fighting Taliban and other Islamist militants.

Shiites make up about 20 per cent of the more than 170 million Pakistanis, most of whom are Sunnis. Shiite-Sunni animosity is mostly driven by theological differences.

Some extremist Sunni groups, including the Taliban, brand Shiites heretics. The Taliban have carried out several attacks against Shiites in the Kurrum and Orakzai tribal districts and other parts of the country.