You are at:Home»Refugees»Europe»Call to stop transfer of asylum seekers to Greece 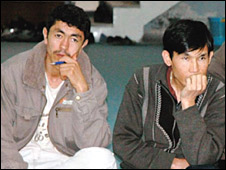 Call to stop transfer of asylum seekers to Greece

By Hazara People on September 2, 2010 0 Comments
Share this story EU STATES need to halt all transfers of asylum seekers back to Greece under the “Dublin II” regulation due to the extremely harsh conditions they face in the state, the Council of Europe’s Human Rights Commissioner has said.

Thomas Hammarberg made the statement yesterday in his first oral intervention as a third party in a case before the European Court of Human Rights in Strasbourg. He said asylum law and practice in Greece were not in compliance with international and European human rights.

Mr Hammarberg’s comments and the test case at the Strasbourg court could have important implications for the Government, which has ordered the transfer of about 40 asylum seekers to Greece under the “Dublin II” rule.

The “Dublin II” regulation says asylum seekers should have their applications for protection heard in the first EU state they enter. It is a cornerstone of EU asylum law and strongly defended by the Government in talks in Brussels with EU partners on asylum policy.

Last month, Ms Justice Maureen Clark said she planned to refer a case involving five asylum seekers facing transfer to Greece from Ireland to the European Court of Justice. This case involves asylum seekers from Afghanistan, Iran and Algeria. However there are about 40 court appeals pending against these transfers.

NGOs such as Amnesty International have expressed grave concerns about the poor conditions for asylum seekers in Greece and have asked EU states to stop sending people back under the regulation.

“Asylum seekers in Greece continue to face enormous difficulties trying to gain access to the asylum procedure and do not always enjoy basic safeguards such as interpretation and legal aid.

“Moreover, existing remedy to appeal against negative asylum applications cannot be considered as effective,” he said.

The test case at the Strasbourg court involves an Afghan asylum seeker who entered the EU via Greece and travelled on to Belgium. He appealed a transfer order issued by Belgium on the grounds he risked “detention in appalling conditions in Greece” and feared he would be sent back to Afghanistan without a proper examination of his case.

The Afghan man was transferred to Greece from Belgium in June 2009. He was immediately detained for several days in conditions he says “were overcrowded and insalubrious”.

Following his release on June 18th, 2009, he lived on the streets, with no means of subsistence. Today he is still waiting for his first interview with the Greek asylum authorities.

The Grand Chamber at the European Court of Human Rights heard the case yesterday.