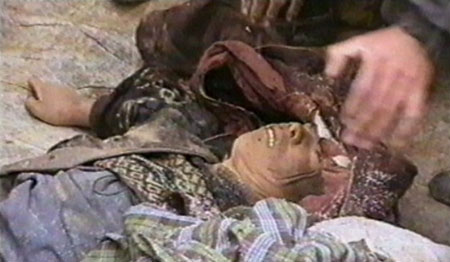 By Hazara People on August 2, 2010 0 Comments
Share this story

Taliban does not commit atrocities against the infidels alone, but also against non-Sunni Muslim sects, whom they consider heretics. The Hazara Shiite Muslims of Afghanistan are one of their major victim…

Taliban recently grabbed headlines by machine gunning 100 unarmed Ahmadi Muslims to death while they were offering namaz in their mosque.

Taliban (extremist Sunni Islamic fanatics of Pakistan and Afghanistan) have a long history of genocide against minorities and those they call heretics.

The Hazaras (shias) of Afghanistan have faced their brutality and genocidal behaviour for a long time:

Recently thousands of Afghanistani Hazara refugees in Australia demonstrated against this ongoing genocide:

In this video a mass grass of 170 Hazaras butchered by Taliban is dug up: Taliban Terror – Afghanistan
http://www.youtube.com/watch?v=_AKcB_1REsw&feature=fvw

One such example of this ongoing genocide took place in Bamiyan when the Taliban first took that town. Along with targeting and destroying a smaller Buddha statue (a prelude to bigger things to come), they committed genocide by summarily executing Hazara males above 13 years old:

Killing and Arresting of Civilians in Bamyan

(An overview of Human Rights situation in Bamyan from September 1998 to middle of May 1999)
Introduction: Bamyan located in the central highland of Afghanistan called Hazarajat, is populated mostly by Hazaras. Bamyan city was the stronghold of Hizb-Wahdat up to September 1998. On 13 September, Hizb-Wahdat forces were defeated by the Taliban after losing Mazar-e Sharif city. It was reported that Hizb Wahdat left 30 Taliban prisoners, who were held in Bamyan prison, while leaving the city.

During its rule over Hazarajat particularly Bamyan, Hizb-e-Wahdat failed to maintain law and order properly. Their behavior toward Tajiks living in Bamyan center, Kohmard and Saighan district was not fair as hundreds of Tajiks preferred to leave Bamyan center during 1996 and 1997.

Mass Killing during the Military Operation of Taliban

The Taliban first time entered Bamyan city on 13 September 1998 after a brief battle on the Aghrubut pass. On 15-17 September, Taliban launched search in Bamyan villages to find out suspect people. During the search, they arrested and killed any male members of Hazara, aged above thirteen. Arrested people were taken to the desert and then assassinated. Sar Asyabb, Haider Abad and Syed Abad villages were among the villages, which suffered more.

Some people were slaughtered like herd and some bodies were cut to pieces. Houses were burnt or destroyed.

It was reported that dead bodies were scattered everywhere. Five bodies were found in Azhdar, three were behind guardroom of Bamyan airport and several bodies were found among trees behind new Bazaar. Many people were killed from displaced families, who were living around Buddha statues, but following capture of the city, they went to nearby villages.

Reportedly Abdul Wahid and Maysam, two workers of ICRC, who decided not to leave their office were also killed.

Number of killed people per village during the Taliban search between 15th and 17th September 1998, as known by Cooperation Centre of Afghanistan (CCA) reporters, is as follow:

Village and Number of Person Killed

It was on the second day of the Taliban presence in Bamyan that two groups of non-Afghan Talibs based in Iranian Consulate building and Bamyan Laycee (High School) targeted the small Buddha by Tank and BM 40 Artillery. These shelling caused some damages in the lower part of its body. Then climbing the statue, they dug its head, filled it with explosive stuff and set it off. The explosion defaced small Buddha and created some cracks in its body.