You are at:Home»Refugees»Europe»Protest in Italy Against Kuchi Attacks in Hazarajat 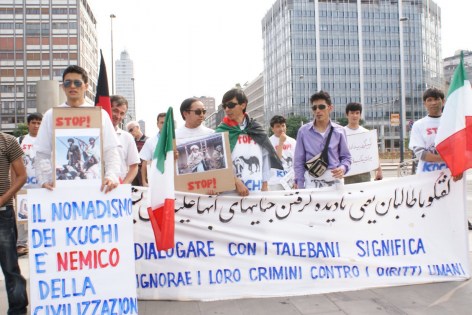 Protest in Italy Against Kuchi Attacks in Hazarajat

Hundreds of people from Afghanistan in Italy staged a protest demonstration on Sunday June 6th at Duca D’Aosta Square, near central station of Milan in Italy to condemn the fierce Taliban nomadic attacks on Hazara villagers of Behsud, Daimirdad and Nahur.

The protesters also condemned the peace jirga calling it a “game show” by President Karzai to bring the Taliban back to power. The speakers said a return of Taliban would put a big question mark on the international efforts in the last 9 years in Afghanistan. Speakers talked in Italian, Dari and English. Protesters were holding banners and placards with slogans against Karzai and Kuchi. They were chanting;

“US, NATO and ISAF in Afghanistan break your silence!”

“The Kuchi nomads should be disarmed the same as all other citizens.”

“The dialogue with the Taliban means ignoring their crimes against humanity!”