You are at:Home»News»Afghanistan»Legalising’ marital rape 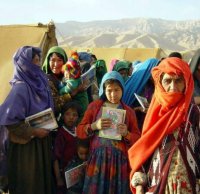 By Hazara People on February 1, 2010 0 Comments
Share this story

There was an international outrage with the US and the UK calling the legislation abhorrent.

But the law was still passed in August ahead of the country’s election and many conservative Shia clerics duly gave their support for Karzai’s candidacy.

We went to meet with a Shia woman called Furshda to ask how life for her has changed since the law passed.

She agreed to speak but only the condition she was not recognisable on camera.

Furshda said she and her three-year-old son ran away from her abusive husband. She offered to show me the scars she is still covered with from all the times her husband beat her and forced himself on her.

Furshda told us: “The new Shia law has made my life even worse.”

“I don’t trust the justice system in Afghanistan, I tried many times to get help from them but now I am in hiding from the authorities as well.”

She says she wants a divorce but it’s impossible as the new laws do not recognise marital rape and abuse. She has given up hope that anyone can help her now.

It is not just the victims of abuse here that are in hiding – the majority of Afghan women’s rights activists who we spoke to about the new Shia law would only do so on condition of anonymity.

One activist told us that “95 per cent of Afghan women are trapped in their homes” and the new law, which also prohibits women from leaving the house without a male escort, has “made that figure even higher for Shia women. It is destroying their chances of being able to escape abusive situations.” These days a walk through Kabul’s more expensive quarters is likely to throw up the very modern sight of Afghan women in make-up and jeans, overlooked by shop windows boasting sequined evening gowns.

But in spite of Afghanistan now boasting by law one of the highest percentages of female parliamentarians in the world, the tide here seems to be turning.

So many of the Afghan women we spoke to said that the promises of greater freedoms and protection made after the invasion of Afghanistan have not been kept; both because of their own government and by the customs and mores that eight years on have still not been rooted out.

The space that opened up for women after the fall of the Taliban is consistently under attack.

And with the deteriorating security situation continuing to top the agenda; the question is how much are President Karzai’s international backers prepared to overlook?